Iran's supreme leader: We do not seek atomic bombs 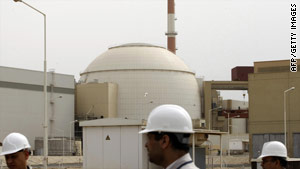 The reactor of Bushehr nuclear power plant at the Iranian port town of Bushehr.
STORY HIGHLIGHTS

Ayatollah Ali Khamenei made the remarks a day after a draft report from the U.N. nuclear watchdog said Iran may be working secretly to develop a nuclear warhead for a missile.

"Iran will not get emotional in its response to these nonsensical statements, because we have often said that our religious tenets and beliefs consider these kinds of weapons of mass destruction to be symbols of genocide and are, therefore, forbidden and considered to be haram (religiously banned)," he said.

"This is why we do not believe in atomic bombs and weapons and do not seek them."

The ayatollah's remarks reflect the tensions between the West and Iran over its nuclear program. The United States and its allies fear that Iran aims to develop the capacity to build a nuclear bomb. Iran denies this, saying its nuclear program is designed solely to produce civilian energy and for medical use.

The document is the first draft report by the International Atomic Energy Agency director general, Yukiya Amano, who replaced Mohamed ElBaradei late last year. It has not been approved by its board of governors, but the agency has expressed concerns over the years about Iran's nuclear activities.

The draft report lists ways in which the Islamic state is allegedly defying U.N. orders about its nuclear program. It said Iran had begun enriching uranium to a level that can sustain a nuclear reaction before IAEA inspectors arrived to monitor the process, and in defiance of a request not to do so.

In Washington, Assistant Secretary of State P.J. Crowley said on Thursday the draft report is the first produced by the IAEA since the recent discovery of a secret nuclear facility at Qom.

"There is no explanation for that facility that is consistent with the needs of a civilian nuclear program," he said. "And it characterizes the way in which Iran has conducted its... relations with the IAEA and its failure to satisfactorily explain, you know, what its activities and ambitions are in the nuclear sphere."

Crowley called the conclusions of the draft report "consistent" with arguments Secretary of State Hillary Clinton made this week in the Middle East.

"We have ongoing concerns about Iran's activities," Crowley told reporters. "We cannot explain why it refuses to come to the table and engage constructively to answer the questions that have been raised, and you have to draw some conclusions from that."

The draft report highlighted concerns about rising tensions in the Middle East, particularly between Iran and Israel. Israel has often been the object of rhetoric by Iranian President Mahmoud Ahmadinejad, who has said the Jewish state "must be wiped off the map" politically. The United States has assured Israel that its interests will be protected.

Iran appears to be "pushing" for concessions from Western powers, he said. "They're pushing on things that make them look like they're going for nuclear weapons, and that's risky. If they go much further, they may bring an attack on themselves by Israel. Iran needs to be a little more careful about its actions."

Michael Levi, a nuclear proliferation analyst at the Council on Foreign Relations, told CNN that, "in a sense, we should be pleased by this. ...Having such a clear statement from an international body can only help develop a robust international response."

On Tuesday, Ahmadinejad warned the United States and other nations not to impose tougher sanctions in reaction to Iran's nuclear ambitions. He said recently that Iran will boost uranium enrichment to 20 percent.

"It's high time for some people to open their eyes and adapt themselves to real changes that are under way," he told reporters in Tehran.

The draft report became public on the same day that U.S. Vice President Joe Biden gave a speech in Washington warning about the dangers of nuclear proliferation.

"The spread of nuclear weapons is the greatest threat facing the country -- and I would argue facing humanity -- and that is why we are working both to stop their proliferation and eventually to eliminate them," Biden said in remarks at National Defense University.