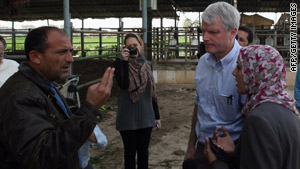 Rep. Brian Baird speaks to a Palestinian man during his latest visit to Gaza, still reeling from the 2009 incursion.

Jerusalem (CNN) -- After visiting twice last year, Rep. Brian Baird is returning from his third trip to the Hamas-controlled Gaza Strip, giving the Washington state Democrat the unusual distinction of having spent more time in Gaza than any other current member of the U.S. Congress.

He said he was discouraged by much of what he saw.

It's a journey that only two other members of the U.S. government have made since Hamas took over the coastal territory in 2007 and since the end of Israel's three-week offensive just over a year ago against Gaza militant groups firing rockets across the border.

Some 1,400 Palestinians and 13 Israelis were killed in the fighting and wide swaths of Gaza were left in rubble.

Baird, who is serving his sixth -- and he says last -- term in Congress, spent two days in Gaza on the latest United Nations-led trip. He says more of his colleagues need to visit the region to see the situation for themselves without the filters traditionally applied on interest-group-sponsored trips.

The international community -- and particularly the United States -- has not done enough, he said, to help the approximately 1.5 million Gaza residents who have been left unable to rebuild after the war because of an Israeli and Egyptian blockade that has been in place since Hamas seized power.

The United States and the European Union consider Hamas a terrorist organization.

"You see a grinding despondency of people who had hoped that there would be a change," Baird said, referencing Palestinian hopes that the Obama administration would be able to deliver peace.

He accused the White House of not doing enough to pressure Israel to allow reconstruction material to enter Gaza. Baird has called for a Berlin Airlift-style operation in which the United States would unilaterally bring in aid via naval ships in coordination with the United Nations.

He argues that such a move would be in America's national interest and that it "would be saying that we do not accept leaving people who are innocent civilians in the kind of conditions that these people have been left in, and we are not going to waste a lot of time in negotiations about pasta or garbanzo beans" -- a pointed critique of Israel which, in addition to prohibiting most building materials from entering Gaza, has also denied imports of some basic food items.

Yigal Palmor, a spokesman for the Israeli Foreign Ministry, said he wondered whether Baird's support of an airlift would have extended to a Berlin under the control of Nazi Germany, and asserted the best way to help Gaza residents is "to get rid of those who took power in a bloody coup and now rule there with the bayonet."

Baird's outspoken comments have stirred controversy among some Jewish groups. The Republican Jewish Coalition described Baird's airlift plan for Gaza "disturbing" and "outrageous" and called on President Obama to repudiate the congressman's comments.

"It's troubling to me that there is a belief in the American political system today that if you speak out for the rights of the Palestinian people ... you are somehow not seen as a loyal American or a friend of Israel," he said. "I am a strong friend of Israel."

He said he does not believe Israel's policies in Gaza are just, and that ultimately "they are going to endanger the security of Israel" and the United States.

Baird says his strongly held feelings on the Middle East stem in part from his involvement in the case of a constituent, Rachel Corrie, a 23-year-old American activist who was killed by an Israeli Army bulldozer in 2003 while attempting to prevent the demolition of a Palestinian's house in Gaza.

He said seeing the toll of the recent war on the children of Gaza has been especially difficult. He believes the policy of blockading Gaza will radicalize a whole new generation against the United States and Israel.

"You don't have to condemn ... an entire population -- including hundreds of thousands of children -- or be called soft on terror," he said. "You can be strong and insistent that terror cease and still protect the rights and needs of those children."