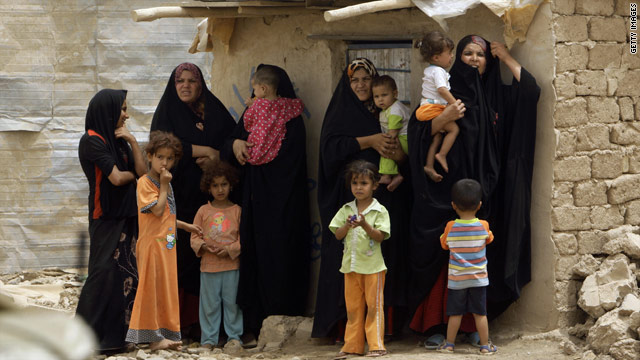 Iraqi women and children at the Chikouk camp for the internally displaced in northwestern Baghdad on July 21, 2009.
STORY HIGHLIGHTS

New York (CNN) -- Violence has dropped in Iraq, but millions of civilians who fled their homes because of warfare in that country remain "uprooted," a refugee-advocate group said in a report released Wednesday.

"Ongoing strife and persecution, occupied and ruined homes and lack of vital services in their communities of origin preclude most from returning home safely," the New York-based International Rescue Committee said in the report, "A Tough Road Home: Uprooted Iraqis in Jordan, Syria and Iraq."

The report was prepared by the organization's Commission on Iraqi Refugees.

"Only a tiny fraction of Iraq's displaced have returned home, in spite of reports that would suggest otherwise," the report said. "For the vast majority of those who remain uprooted, the situation is precarious and growing worse, yet aid levels that were inadequate to begin with are dropping off."

In a statement accompanying the report, the refugee commission, which visited Jordan, Syria and Iraq late last year, said most displaced Iraqis inside and outside of the country "are struggling to get by and continue to face overwhelming economic obstacles.

"They have largely exhausted savings they once had and are becoming more, if not solely, dependent on charity," the commission said. "Few are able to find stable sources of income. Many lack adequate shelter, food and other basic services. Those who have been renting apartments are increasingly unable to afford them. A large number suffer severe psychological distress over the loss of family, savings, livelihoods and property."

The group said government assistance is "often out of reach" in Iraq "because of chronic insecurity and bureaucratic red tape." And health care and other services in Jordan and Syria, where many Iraqis have fled, are too expensive, it said.

Iraq hasn't "adequately" addressed the crisis, the commission said, and should increase aid for the uprooted and improve protections for civilians threatened by sectarian violence. The United States, it said, must allocate more money for the displaced in Iraq, Syria and Jordan, and European countries must stay engaged in Iraq.

Noting that Syria and Jordan "have shouldered an enormous burden by taking in hundreds of thousands of refugees," the group said those nations need "to extend temporary legal status to refugees and permit them to work."