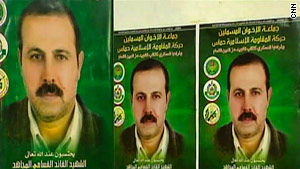 (CNN) -- Dubai police Monday identified 11 people suspected in the killing of a top Hamas official last month and vowed "to hunt them down."

At the same time, police offered a chilling scenario of how Mahmoud al-Mabhouh, a founding member of Hamas' military wing who had survived at least three other previous attempts on his life, was killed in his hotel room January 19 just hours after arriving in Dubai, United Arab Emirates.

The 11 suspects identified Monday include one woman and 10 men. All of them hold valid European passports -- one from France, three from Ireland, six from Britain, and one from Germany. None of the suspects has been arrested or charged in the killing.

According to police, the suspects arrived in Dubai the day before the killing. Five of them carried out the crime while the remaining six served as lookouts, police said.

Police identified a man from France as the logistical mastermind. Police allege the man stayed at a luxury hotel in Dubai, but also booked a room at the al Bustan Rotana hotel where al-Mabhouh was killed. The French suspect requested room 237 -- directly across from where al-Mabhouh was staying in room 230, police say, but the suspect apparently never stayed there. Instead, police say the rest of the group used the room to plot the killing and the alleged mastermind left the country before it was carried out.

Footage on security cameras at Dubai International Airport show one of the suspects following al-Mabhouh after he landed, police said. Two others followed him once he arrived at the hotel, police said, taking the same elevator and ensuring al-Mabhouh was staying in room 230.

Police said they believe the suspects entered al-Mabhouh's room about 8 p.m. after the hotel cleaning crew finished their rotation on the floor, using an electronic device to gain entry.

Al-Mabhouh entered his room at 8:25 p.m., hotel security cameras and an electronic readout of his room key show. Police say the killing took no more than 10 minutes before the suspects left the room and headed immediately to the airport where they boarded flights to various cities in Europe and Asia, police said.

Before leaving, police said, the group took great care to make sure the room looked orderly, removing anything that might indicate that al-Mabhouh resisted. The suspects also deliberately turned the safety lock on the room door from the inside in order to suggest the death was normal, police said.

Police did not provide details about the nature of the killing in its statement Monday, but authorities have told al-Mabhouh's family that there were signs of five or six electric shocks on his legs, behind his ears, on his genitals and heart. Blood on a pillow led police to believe he was suffocated.

Dubai police chief Dahi Khalfan said in a statement Monday that "The United Arab Emirates does not accept the notion that its land can be used as a battlefield for settling scores no matter what the causes or affiliations of these involved perpetrators can be."

He warned that anyone who tries to "tamper with the country's security or the safety of any resident or visitor of its community will be subject to prosecution and accountability."

At al-Mabhouh's funeral in January in Damascus, Syria, where he spent the last years of his life, mourners speculated that Israel's intelligence unit, Mossad, was behind the assassination. Al-Mabhouh was behind the kidnapping and killing of two Israeli soldiers in 1989, according to Hamas.

Israeli security sources have told CNN that al-Mabhouh was a key link between Iran, Hezbollah and Hamas and he was involved in smuggling arms to Gaza. The same sources also point out an arms dealer could have many enemies, not just Israel.

Israel has a stated policy on security matters of neither confirming nor denying involvement.