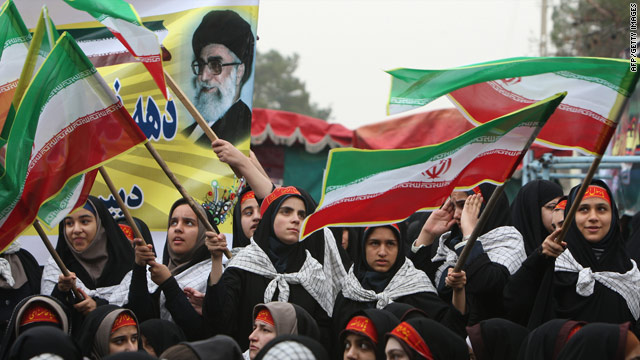 Schoolgirls wave Iranian flags as they mark the start of 10 days of celebrations for the anniversary of the Islamic revolution at the Behesht-e Zahra (Zahra's Paradise) cemetery in southern Tehran on February 1, 2010.
STORY HIGHLIGHTS

(CNN) -- Heightening its warnings as anticipated anti-government protests approach, Iran's government says it will arrest protesters and hold them until April if they disrupt state-sanctioned marches to commemorate the overthrow of the Shah of Iran.

Iran is this week celebrating the 31st anniversary of the Islamic Revolution, culminating on February 11 -- a day that marked the end of the country's Western-backed monarchy and the start of an Islamic republic. A coalition of Iranian reformist groups is urging opponents of the regime to stage non-violent protests on Thursday, on the official anniversary of the Shah's ouster.

The so-called Green Movement has been protesting for social justice, freedom and democracy in demonstrations throughout the country since the disputed June president election.

Those arrested for causing "instability," disrupting public order and carrying "extremist signs" linked to the Green Movement will be jailed until at least April 9, the end of the Persian holiday, of Norooz, according to government-run Fars news agency.

Video: Iranians to get global support

The holiday marks the start of spring.

"Given the security plans that the police have taken into consideration for tomorrow's glorious marches; these ceremonies will be held in complete security and calm," Fars quoted an unidentified, informed source as saying Wednesday. "But if some try to misuse the vast participation and presence of the people; the police will deal with them firmly and resolutely."

Police arrested 4,000 people in the post-election crackdown. At least seven people were killed and hundreds were arrested, witnesses said, as they took to the streets of December 27 during the Shiite Muslim holy period of Ashura.

On Tuesday, an Iranian court sentenced one person to death and eight others to prison for their parts in anti-government demonstrations in December, the semi-official Fars news agency reported.

The nine defendants were tried last week over their roles in protests during Ashura, Fars said, quoting the Tehran judiciary's public relations office.

There are now 10 people sentenced to death and awaiting appeal in connection with the protests.

Two men have been executed for participating in anti-government demonstrations, but a lawyer for one of them told CNN her client was already in jail when the protests broke out.