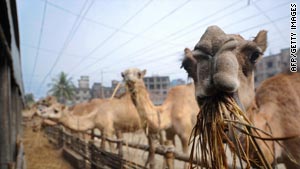 Camel meat has, for centuries, been a feature of traditional nomad cooking. Now, it has been given a 21st century twist.
STORY HIGHLIGHTS

Right now, Dubai diners can't seem to get enough of the "camel burger."

"It's a sensation," Ramesh, restaurant manager at "Local House" the restaurant chain behind the burgers told CNN. "Everyone's bored of beef and chicken. So, as soon as the word got out, we had queues of customers eager to give it a try."

Not only are the exotic burgers a novelty, they are also a healthier alternative to their beefy American cousins, the restaurant claims. The $6 "camel quarter-pounder" is virtually fat and cholesterol-free, according to Ramesh.

"Not only are they super healthy, but the flavor is amazing," he told CNN of the centuries-old Bedouin delicacy they have given a 21st century twist.

Instead of the familiar sesame bun, they serve the burgers with freshly-baked "khameer" -- a popular and yeasty regional bread.

Camel burgers are ten times better than any other burger
--Ramesh, Manager of the "Local House"
RELATED TOPICS

"It also comes with melted cheddar cheese, our very own burger sauce and a portion of fries," Ramesh said.

The restaurant's novel burgers have so far been a runaway success with inquisitive tourists and local Emirates alike.

"Many have said they prefer it to normal burgers, and a lot of people can hardly taste the difference," Ramesh told CNN.

Although camel meat is similar to beef in taste, it has a reputation for being extraordinarily tough. How the "Local House" transforms it into a soft and tender patty remains a closely guarded secret.

"Khalib [camel-burger inventor and the restaurant's owner] spent over two months perfecting the recipe and working out how to tenderize the meat. I'm not permitted to tell you how it's done," Ramesh said.

Camel cuisines from around the globe
Camel blood, Kenya
In parts of Nothern Kenya camel blood is mixed with milk and drunk by nomadic tribes as a key source of iron, salts and other essential nutrients.

Camel-hoof soup, China
In 7th century China, Emperor Xuanzong, one the country's longest-reigning emperors, loved few things more than a bowl of camel-hoof soup. Although it no longer enjoys such high celebrity, the dish -- served with dried scallops and mushrooms -- still features in many Chinese cookbooks.

Camel lasagna, Australia
Having imported thousands of camels to transport building materials in the 1800s, Australia now has the largest population of feral camels in the world. Regarded as pests, many Australians would rather see them on a plate than in the wild.
Sources: www.daff.gov.au, www.fao.org, www.asianfood.com


For the full camel experience, patrons are invited to wash their order down with a vitamin and insulin-rich vanilla-flavored camel milkshake. In fact, so popular are their camel products that the restaurant has plans to open a new section -- provisionally called the "Camel Corner."

Camel meat has, for centuries, been a feature of traditional nomad recipes as a result of its ability to survive in the very arid conditions of the Arabian Peninsula.

The transition to a more urban, sedentary way of life has replaced these customs in all but the most isolated tribes, according to the Food and Agriculture Organization of the United Nations.

The camel burger is a modern way of engaging with traditional foods, Ramesh told CNN. "Local House" is not the only establishment in Dubai exploring the desert-dweller's culinary potential.

With plans for a new burger joint to be built in the shadow of the world's tallest building, the Burj Khalifa, camel meat is on its way to being a food of Dubai's future as well as its ancient past.