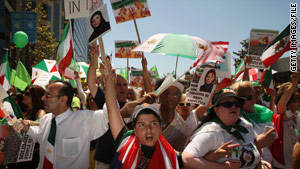 Protesters in Los Angeles, California, in June march against what they say are human rights abuses in Iran.
STORY HIGHLIGHTS

(CNN) -- The United States and the European Union on Monday called on Iran to "end its abuses against its own people" amid mounting concerns about a potential rise in violence later this week.

"The United States and the European Union condemn the continuing human rights violations in Iran since the June 12 election," the U.S. and EU governments said in a joint statement.

"The large-scale detentions and mass trials, the threatened execution of protesters, the intimidation of family members of those detained and the continuing denial to its citizens of the right to peaceful expression are contrary to human rights norms," they said.

On Thursday Iran will celebrate the anniversary of the Islamic republic's founding. In the statement the United States and the European Union said, "We are particularly concerned by the potential for further violence and repression during the coming days, especially around" the anniversary.

"We call on the government of Iran to live up to its international human rights obligations, to end its abuses against its own people, to hold accountable those who have committed the abuses and to release those who are exercising their rights."

The state-run news agency IRNA said supreme leader Ayatollah Khamenei spoke Monday to a group of commanders and personnel of the army air force. According to IRNA, Khamenei said "the so-called advocates of human rights have ignored the most basic human rights in their prisons and officially trample upon the rights of their own nations which is a source of shame for them."

The International Campaign for Human Rights in Iran issued a statement Monday condemning "the prosecution of a young student activist... under the charge of Moharebeh, or 'enmity against God,' which is punishable by death."

"At least nine other protesters have been sentenced to death in similar unfair trials and are at risk of imminent execution," the group said.

The reports could not be independently verified by CNN.

Khamenei, according to the IRNA report, said Monday that "the unified Iranian nation will stun the global arrogance on February 11."

The IRNA report also tried to write off the strife that followed last year's election, in which thousands of Iranians took to the streets to protest.

"Ayatollah Khamenei said that unity of the Iranian people is a thorn in the eyes of the enemies, referring to the post-presidential election events in Iran during which the enemies tried in vain to sow seeds of discords among unified Iranian nation," the report said.