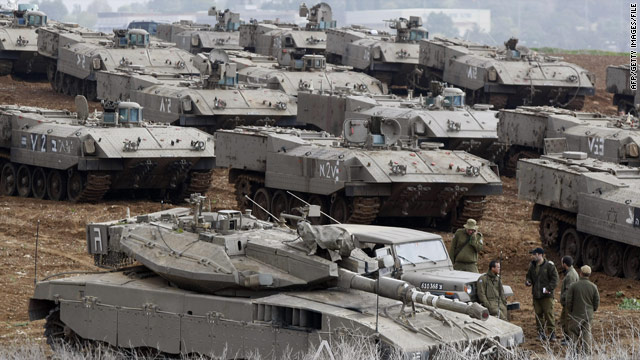 An Israeli convoy takes up a position near the border with Gaza on December 28, 2008.
STORY HIGHLIGHTS
RELATED TOPICS

Israel has not demonstrated that it will conduct thorough and objective investigations, Human Rights Watch said in a statement.

"An independent investigation is crucial to understand why so many civilians died and to bring justice for the victims of unlawful attacks," said Joe Stork, deputy Middle East director for the New York-based organization.

In September, the United Nations Human Rights Council released a report by noted South African jurist Richard Goldstone. The report concluded that both sides committed war crimes during the conflict, which killed about 1,400 Palestinians and 13 Israelis.

But U.N. chief Ban Ki-moon said last week that the world body has not made a determination on whether both sides have done enough to investigate allegations they committed war crimes during the three-week conflict, which began at the end of December 2008.

In a report, Ban outlines steps Israelis and Palestinians have taken to fulfill a U.N. demand for credible and transparent inquiries into civilian casualties. However, he concludes, "As such, no determination can be made on the implementation of the resolution by the parties concerned."

Israel handed Ban a response outlining the steps the nation has taken to investigate charges of wrongdoing by its military during the course of the offensive in Gaza, which was aimed at stopping militant rocket fire into Israel.

The Israeli military has "launched investigations into 150 separate incidents, including 36 criminal investigations opened thus far," according to the report.

For its part, the Palestinian Authority said it had created a commission to look into various charges of abuses, but made clear that it did not view the potential wrongdoing on the Palestinian side as seriously as that allegedly committed by the Israeli military.

"There is absolutely no symmetry or proportionality between the occupying power and the occupied people" wrote Riyad Mansour, Palestinian ambassador to the United Nations.

In Gaza, the ruling Hamas movement released a summary of the steps taken to investigate wrongdoing, saying it had prevented militants from targeting civilians.

But the rights organization dismissed the conclusion as "factually wrong." Human Rights Watch said it is still reviewing a full Hamas report.

"Hamas can spin the story and deny the evidence, but hundreds of rockets rained down on civilian areas in Israel where no military installations were located," Stork said. "Hamas leaders at the time indicated they were intending to harm civilians."