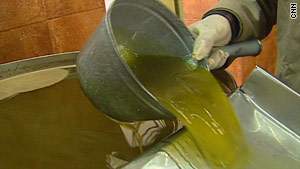 At his family farm south of Tunis, he fashions the liquid gold the old-fashioned way -- slowly cold-pressing the olives and then ladling the oil by hand after it separates and rises to the top of the barrel.

It's not the best way to make money off an olive grove. But it could well be the purest.

"When people come here, the professionals, they say, 'Oh, you are losing a lot of money," Mahjoub told CNN during an interview at Les Moulins Mahjoub, his farm in Tebourba, just south of the Tunisian capital. "We say, 'Yes, we know it.'"

Tunisia is one of the world's largest olive oil producers. Olive oil production plays a key role in the Mediterranean country's economy, employing more than 300,000 farmers and providing some sort of income to an estimated one million Tunisians.

Tunisian olive groves comprise some 70 million trees. Figures released recently by the Tunisian Olive Oil board show that about 70 percent of the country's oil is exported.

Tunisia has trebled its olive oil production over the past 50 years. But it's the recent world-wide interest in organic products that has boosted the branding of Tunisian oil, which had suffered from a low profile.

"The first criteria, we make it [the oil] at the best maturity of the olives, when the olive is half-green, half-dark," said Mahjoub, whose family has been making olive oil at its farm for more than a century. The hand-picked olives are then crushed at a slow speed to keep the temperature low.

"This is very important to avoid giving heat to the paste," Mahjoub told CNN. "It is very important." By keeping the olives cold, the Mahjoubs seek to preserve their antioxidant qualities, something consumers are looking for more and more these days. Their golden olive oil is branded organic.

"The velocity of the crush machine is very important," Mahjoub said. "This machine is made for bigger velocity, but we change it all the time to have this cold product."

The less violent you go on him, the more flavour you have ... the more life you give to the product.
Topics
RELATED TOPICS

After the olives are crushed into paste, they are pressed, which yields a pungent, dark brown mixture of water and oil.

But what makes this Tunisian olive mill unique is that the oil and water are separated, not in a heated centrifuge, but by gravity.

Lighter than water, the oil rises to the top and is then ladled, by hand, into barrels.

The Mahjoubs' slower, more labor-intensive process fits in with the family's traditional approach.

"You have the principle that any fruit you want to extract from its juice, its flavor," said Abdelwaheb Mahjoub, Abdel Majid's brother and business partner. "The less violent you go on him, the more flavor you have, the more quality you have, the more life you give to the product."

Abdelwaheb Mahjoub said that 15 years ago, the family met to consider the future of their business, whether to go mass market, or concentrate on niche. They chose niche, he said.

Their olive oil, along with a range of other produce from their farm, is sold in upscale stores in Europe, North America and Japan. The company's organic olive oil has been available in the trendy bakery chain, Le Pain Quotidien, for several years.

Although the vast majority of Tunisian oil is destined for overseas, some 30 percent is consumed locally, where its history dates back to the 8th century B.C.

In Tunisia, the olive tree was cultivated by the Phoenicians, the Greeks, the Carthaginians, the Romans and the Arabs.

And now by producers like the Mahjoubs, among many others.

The family finds inspiration in the long history that came before them.

Asked if they could have become much richer producing olive oil in a more modern way, Abdelwaheb Mahjoub replied: "Absolutely."

"Our thinking and our philosophy is quality first."

Daniela Deane contributed to this report