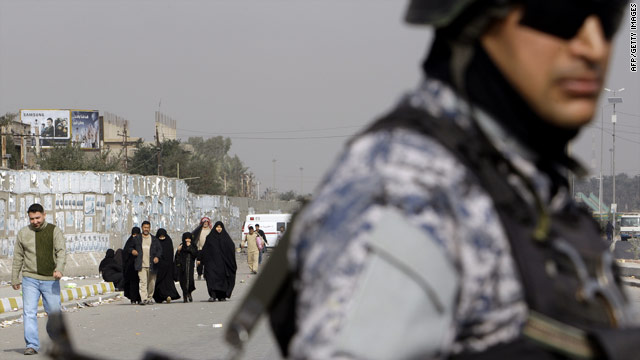 An Iraqi soldier stands guard as Muslim Shiite pilgrims head to the holy city of Karbala to take part in the Arbaeen.
STORY HIGHLIGHTS
RELATED TOPICS

Baghdad, Iraq (CNN) -- A motorcycle bomb killed 20 people and injured 117 others south of Baghdad on Wednesday, the Interior Ministry said.

The bombing in the holy city of Karbala was one of four attacks targeting Shiite pilgrims as they headed toward the shrine of Imam Hussein on Wednesday morning, a ministry official said.

Three people died and 23 were injured in the other attacks.

Wednesday's attacks came two days after a suicide bomber killed 41 people and wounded 106 others in an assault on pilgrims in northeastern Baghdad.

Iraqi authorities are trying to provide security to thousands of Shiite worshipers who are making their way to Karbala to mark the Arbaeen -- the end of the 40-day mourning period at the close of Ashura.