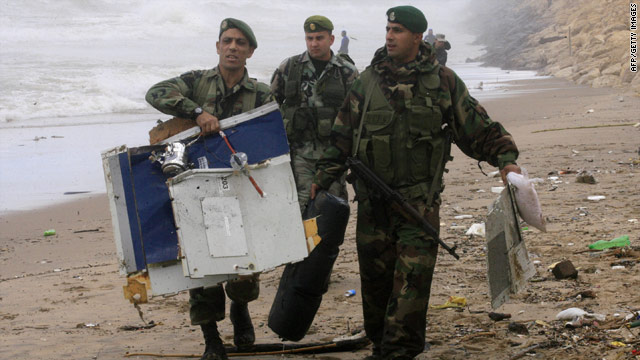 Lebanese troops carry the debris of an Ethiopian Boeing 737 that crashed into the Meditteranean.
STORY HIGHLIGHTS

Beirut, Lebanon (CNN) -- Air traffic controllers in Lebanon were telling the pilot of an Ethiopian Airlines flight to change course shortly before it crashed into the sea, the country's transportation minister told CNN Tuesday.

An international search team was combing Lebanon's Mediterranean coastline for signs of life Tuesday amid fears that all 90 people aboard the Addis Ababa-bound airliner perished in the accident, authorities said.

Lebanese Transportation Minister Ghazi al-Aridi said Tuesday it was too early to determine whether pilot error had caused the crash.

He said the plane's flight data and cockpit voice recorders would need to be recovered to determine why Flight 409 disappeared from radar screens shortly after taking off from Beirut's Rafik Hariri International Airport at about 2:30 a.m. local time.

The control tower lost contact with the plane before it made a course correction Monday, al-Aridi said.

In a statement, Ethiopian Airlines said the pilot of the flight had more than 20 years of experience flying various aircraft with the airline's network. The plane had been declared safe and fit to fly following a regular maintenance service on December 25, 2009, the airline said.

The Lebanese military reported Tuesday that 14 bodies had been found -- nine fewer than an earlier count. Confusion early in the search led to double-counting, they said. No survivors have been found.

The search included aircraft from the United States, Britain, France and Cyprus.

The U.S. military sent the USS Ramage -- a guided missile destroyer -- and Navy P-3 aircraft in response to Lebanese requests for assistance, according to U.S. defense officials.

"We don't believe that there is any indication for sabotage or foul play," Lebanese President Michel Suleiman said Monday.

The U.S. National Transportation Safety Board is also sending an investigator because the plane was made by a U.S. manufacturer.

The Boeing 737-800 had eight crew members and 82 passengers -- 51 Lebanese nationals, 23 Ethiopians, two Britons and citizens from Canada, Iraq, Russia, Syria, Turkey and France -- when it went down, the airline said.

The plane crashed about 3.5 kilometers (2 miles) west of the town of Na'ameh which is 15 kilometers (9 miles) south of Beirut.

Government-owned Ethiopian Airlines is one of the largest carriers in Africa, serving Europe and three other continents. The airline has experienced two fatal crashes since 1980.

In November 1996, a flight bound for Ivory Coast was hijacked by three men who demanded that the pilot fly to Australia. The pilot crashed while attempting an emergency landing near the Comoros Islands off Africa. About 130 of the 172 people aboard died, according to published reports.

And in September 1988, a flight struck a flock of birds during takeoff. During the crash landing that followed, 31 of the 105 people aboard died.

CNN's Nada Husseini and Cal Perry contributed to this report.