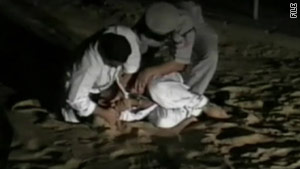 Part of the evidence against Sheikh Issa bin Zayed al-Nahyan was a three-hour video of the alleged incident.
STORY HIGHLIGHTS
RELATED TOPICS

Sheikh Issa bin Zayed al-Nahyan, a member of the emirates' ruling family, was charged with rape, endangering life and causing bodily harm in connection with the nearly three-hour long tape shot in 2004 in the desert outside Abu Dhabi, one of the United Arab Emirates in the Persian Gulf region.

"The judiciary system acquitted Issa based on the evidence presented by the defense that the sheikh was under the influence of drugs given to him," al-Mulla said. "That deprived him from his poise and caused him to carry out acts that were out of consciousness and that were photographed with the intention for later extortion."

The tape surfaced last year as a piece of evidence in a federal civil suit filed in Houston, Texas, against the sheikh by his former business partner, Bassam Nabulsi. It caused outrage among human rights groups and in the United States, where senior U.S. officials familiar with the case said the tape delayed the ratification of a civil nuclear deal between the UAE and the United States.

On the tape, Issa is seen along with a private security officer stuffing sand in the man's mouth. As the grain dealer pleads and whimpers, he is beaten with a nailed board, burned in the genitals with a cigarette lighter, shocked with a cattle prod and led to believe he would be shot. Salt is poured into his wounds.

In the end, the victim can muster up only weak moans as an SUV is repeatedly driven over him.

"No one can prove that this videotape has not been tampered with," al-Mulla said Sunday. The only person who can confirm the incidents happened as seen on the tape is the victim, and he has not confirmed that, he added. "We deny the incident as it was shown on that videotape."

The defense did not just center on the medication, he said, but claimed that the videotape and other incidents from that night were all part of a conspiracy aimed at blackmailing the sheikh.

During the trial, the defense presented medical reports from experts in the United States and the United Arab Emirates showing that the various types of medicines given to Issa, when combined, "would lead any person to act in a very aggressive manner, losing his control and his behavior."

Asked about a Human Rights Watch statement that one trial was not enough to stop torture and restore the United Arab Emirates' image, al-Mulla told CNN he believed the UAE was "courageous" to hold the trial, calling it "a very positive signal of what the UAE is trying to achieve."

The incident allegedly was triggered by Issa's belief he was cheated in a business deal. UAE officials have said the grain dealer survived and has settled the matter privately with the sheikh, with the two agreeing not to bring formal charges against the other.

Al-Mulla said he is "pleased with the verdict as it was proven that Sheikh Issa was a victim, and he was not what the media tried to portray him [as]."

Nabulsi, a Lebanese-born U.S. citizen now living in Houston, said he met Issa when the sheikh came to Houston for medical treatment in 1994. They became friends and business partners and the sheikh recruited Nabulsi to move to Abu Dhabi to work for him.

In the lawsuit, Nabulsi claims breaches of contract and fiduciary duty. A federal court dismissed the suit in June, ruling it did not have jurisdiction, according to online federal court records. Nabulsi has appealed to the Fifth Circuit U.S. Court of Appeals.

Nabulsi told CNN in April the sheikh turned on him after he expressed concern over the Afghan's treatment. Later, he was arrested on drug charges, and security officers working for the sheikh ransacked his home and demanded the torture video. But the tape -- shot by Nabulsi's brother at the order of the sheikh, he said -- had already been smuggled out of the country.

Nabulsi said he was arrested, jailed and ultimately convicted on drug charges -- and was tortured and humiliated by UAE police, who demanded he return the tape.

Al-Mulla said Sunday Nabulsi was sentenced to five years in jail in absentia, agreeing that he was responsible for the drugging of the sheikh. Prosecutors will attempt to implement the sentence through Interpol, he said.