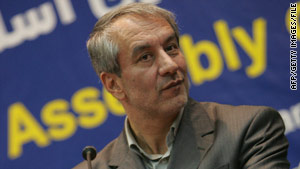 (CNN) -- The head of Iran's soccer federation issued a public apology and a member of his staff resigned after the federation mistakenly sent a New Year's greeting to its counterpart in Israel, Iranian officials announced Sunday.

"It was a big mistake sending an e-mail to Israel's football federation," Ali Kaffashian, president of the Iran Football Federation, said in a statement carried by the semi-official Mehrs News Agency. "However, I am sure the director of the foreign relations office didn't do it on purpose."

Kaffashian said Iran's soccer league routinely sends New Year's greetings to all members of FIFA, the sport's global federation, except for Israel. Iran does not recognize Israel, which it dismisses as the "Zionist entity," and the two countries' teams do not meet in international competitions.