No U.S. combat-related deaths in Iraq in December 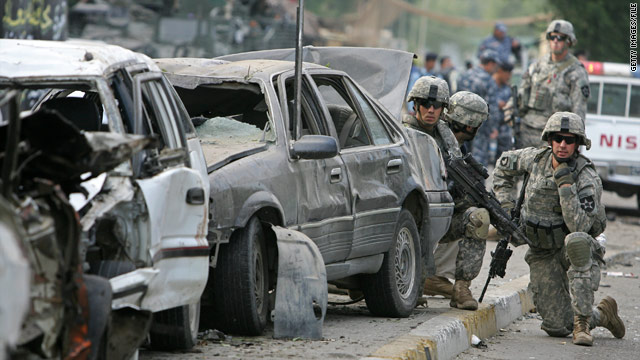 For the first time since the Iraq war began in 2003, no U.S. troops were killed in battle in December.
STORY HIGHLIGHTS
RELATED TOPICS

Baghdad, Iraq (CNN) -- December was the first month since the beginning of the Iraq war in which there were no U.S. combat deaths, the U.S. military reported.

There were three noncombat fatalities.

"That is a very significant milestone for us as we continue to move forward, and I think that also speaks to the level of violence and how it has decreased over time," said Army Gen. Ray Odierno, the top U.S. commander in Iraq.

Since the beginning of the war more than six years ago, 4,373 U.S. military members have died -- 3,477 from hostilities and 898 in non-combat incidents.

Combat fatalities have decreased significantly since June, when the United States started withdrawing troops from Baghdad, Iraq's capital, and other urban areas. The United States also started a troop drawdown in 2009 from about 160,000 to the current level of around 110,000.

The U.S. military suffered double-digit combat-related deaths in February, April, May and June 2009. The highest was 17 in May. There were also eight non-combat deaths in May, making for the highest monthly total in 2009.

Since July, U.S. forces have suffered no more than five combat-related deaths each month. There were five in July, three in August, four in September, two in October and four in November.

Casualties also have decreased among Iraqis, with Interior Ministry officials reporting in late November that the civilian death toll fell that month to its lowest level since the 2003 U.S.-led invasion.

November recorded the lowest casualty figures for Iraqis since the U.S.-led invasion, with 88 civilians killed and 332 wounded. In addition, 12 Iraqi soldiers died in November and 44 were wounded. Among Iraqi police, 22 died and 56 were wounded.

Previously, January 2009 had the lowest Iraqi civilian casualty figures since 2003. Since then, figures had been fluctuating, with August being the deadliest month for Iraqi civilians in more than a year.

Daily violence has drastically dropped across the country over the past two years, but sporadic spectacular attacks, including high-profile suicide bombings against government buildings on August 19, October 25 and December 8, continue to claim hundreds of lives and shake confidence in the abilities of Iraq's security forces.

President Obama has said he plans to withdraw all U.S. combat forces from Iraq by August 2010 and all remaining troops by December 2011. Britain, the United States' major ally in Iraq, ended combat operations in April.