Dutch arrest 12 on suspicion of terrorism 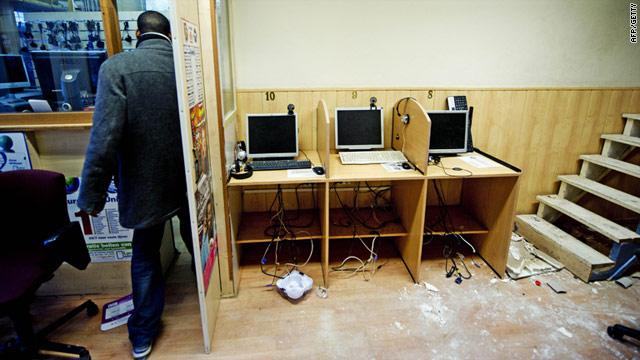 (CNN) -- Dutch authorities have arrested 12 men of Somali origin they believe were about to carry out a terrorist attack, authorities said Saturday.

No weapons or explosives were found, he said. The suspects are in police custody.

"The attack was said to be imminent so the national police started an investigation which led to the arrest of 12 Somalis later on Friday in Rotterdam," de Bruin said. "We are not sure about what the target was, how they were going to carry out the attack or when."

A Dutch counterterrorism office spokeswoman said the immediate threat to the country has been removed and the terror alert level will remain "limited," or relatively low.

"We are now following the information that comes out of the interrogations with these 12 individuals to see if there still remains a threat from this plot," said Judith Sluiter of the National Coordinator for Counterterrorism.

The men, between ages 19 and 48, were arrested in various locations. Police have searched a pawn shop, four homes and two hotel rooms, de Bruin said.

Six of the suspects live in Rotterdam and one is from Denmark. Some are Dutch citizens. They all are of Somali origin, de Bruin said.

A spokesman for the Danish Security Service said authorities are in "close contact" with Dutch police.

War-torn Somalia has a virtually powerless central government and is home to several militant groups, including Al-Shabaab, which controls much of the country

Al-Shabaab has claimed responsibility for several attacks, including a series of bombs that tore through an Ethiopian restaurant and a rugby center in the Ugandan capital of Kampala. Officials said the July 11 blasts, which killed 79 people, were probably set off by suicide bombers.

The United States this year charged several people with trying to funnel money or otherwise assist Somali extremists. Al-Shabaab has been linked to al Qaeda.

The Netherlands is concerned about threats to Western countries, including itself, said Sluiter. She made a reference to the recent suicide bombing in Stockholm, Sweden.

Domestic militants were becoming more focused on jihad outside the Netherlands, the report said. But it did say the country was seeing more jihadist threats from Somalia and Yemen.

The report noted several cases of Dutch citizens trying to travel to Somalia to join Al-Shabaab, including four arrested in 2009 in Kenya.

The arrests in the Netherlands followed an unrelated sweep a few days before in the United Kingdom.

An operation Monday led by the British intelligence service, MI5, resulted in arrests of 12 suspects ranging in age from 17 to 28 in the cities of London, Stoke and Birmingham, England, as well as Cardiff, Wales.