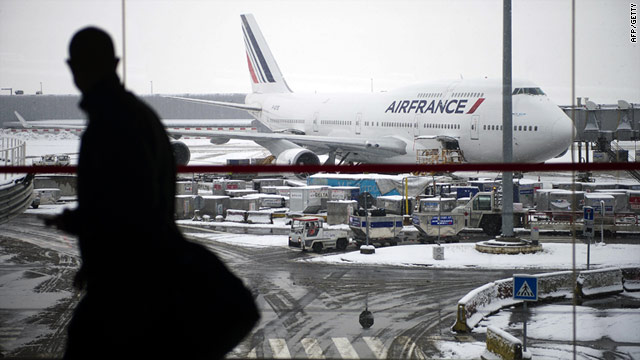 Charles de Gaulle has canceled half its flights on Friday because authorities say levels of de-icing fluid have run low.
STORY HIGHLIGHTS

Has the snow stranded you in Paris? Share your photos, videos and story

Paris (CNN) -- Part of Paris Charles de Gaulle airport was evacuated Friday due to the accumulation of snow on the roof, and hundreds of flights were canceled because of a shortage of de-icing fluid, authorities said.

Nearly 2,000 passengers were moved from Terminal 2E to other parts of the airport, authorities said, calling the measure "preventative."

Part of the roof of that terminal collapsed in 2004, shortly after the state-of-the-art building was inaugurated. Four people were killed, media reports at the time said.

About a foot of snow had fallen on the roof Friday by the time authorities decided to close the terminal, French media reports said. Authorities were working to clear it and reopen the terminal.

French authorities earlier Friday asked airlines to cancel half their morning flights to and from the airport because de-icing fluid is running low, they said.

That led to the cancellation of 400 flights Friday morning -- 200 arrivals and 200 departures.

Then, early in the afternoon, they asked airlines to scrap a third of their flights for the rest of the day.

Charles de Gaulle is the second busiest airport in Europe, after Heathrow in London.

Paris' second airport, Orly, has not had to cancel flights because they are not running out of glycol, which is using for de-icing, authorities said.

Airports in Europe are still struggling to get passengers to their destinations after they were snarled by unexpected snow over the weekend.

Dublin airport was experiencing delays Friday because of de-icing and because airplanes are in the wrong places after the week's disruptions, it said in a statement.