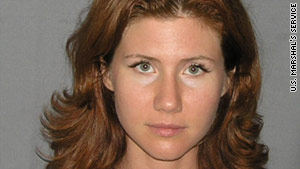 Anna Chapman is now on the public board of the youth branch of Russia's ruling party.
STORY HIGHLIGHTS
RELATED TOPICS

Moscow, Russia (CNN) -- Anna Chapman, one of the Russian sleeper agents deported by the United States in last summer's spy swap, will be giving the dour face of Russian political life a bit of flash and glamour.

Chapman was elected to the public board of the pro-government The Young Guard of United Russia on Wednesday, according to Russian news agency reports.

The organization, which is the youth branch of Russia's ruling United Russia party, held a congress in Moscow on its fifth anniversary and reshuffled its leadership.

The country's powerful prime minister, Vladimir Putin, is chairman of the United Russia which controls more than two-thirds of seats in the Russian parliament, the State Duma, as well as most local legislatures across the country.

Chapman is one of the 10 Russian spies in the United States swapped last July in exchange for four Russian prisoners -- a transfer that conjured the politics and tensions during the Cold War.

Chapman, perhaps the most famous of the 10 Russians, has been relentlessly covered by international media and portrayed as a glamorous spy.

In her new role, Chapman addressed the congress's participants, according to Interfax.

"So many people are hunting after power, glory and money," she was quoted as saying. "But does all that make us more happy? Maybe all we really need is something more human and positive?"

"There would be much less negative things in the society if each of us would wake up with a smile and be happy about a new day, when one can create something new and useful," she said.

Interfax and state-run news agency RIA-Novosti reported that Chapman rushed out of the congress hall right after her short speech without speaking to journalists who chased her all the way to the exit.

RIA-Novosti said they were asking her about why she joined The Young Guard and what she plans to do in her new position. But Chapman didn't respond to any questions, RIA-Novosti said.