By Sheri Jennings, For CNN 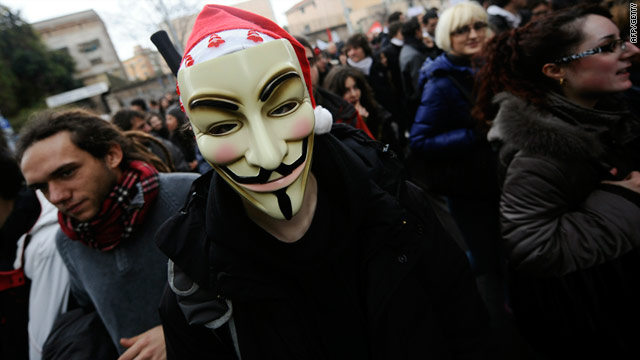 Students say the reforms will harm their futures and Italy's educational system.

The demonstrations came in the wake of violent protests on December 14, after Berlusconi survived a parliamentary vote that could have ended his tenure as prime minister. He pulled through by three votes.

Ensuing violence on that day caused an estimated 20 million euros ($26 million) damage to Rome's historic center when cars, garbage cans and benches were set aflame and cash machines and store windows were smashed. More than 100 people were injured, although none seriously.

Protesters on Wednesday opted to avoid the heavily patrolled city center by aiming for the outskirts of town, where they blocked a major thoroughfare.

"We are peaceful. We think the only violence is the reform the government is imposing on our country in these days," Simone Oggionni, a demonstrator outside Rome's La Sapienza University, told CNN.

The student marches remained peaceful into the mid-afternoon in the Italian capital.

However, there were reports of pockets of violence in other Italian cities, including Milan and Palermo.

Backers of the reform say it will save Italy's education system by increasing transparency and reinforcing a meritocracy.

Students claim the reform package amounts to cuts and the privatization of the education sector.

Known as the "legge Gelmini" after Education Minister Mariastella Gelmini, the reform was scheduled for a vote in the Senate Wednesday, but voting is now likely to be put off until Thursday.

Students are reaching out to Italy's President Giorgio Napolitano and planned to meet with him later on Wednesday. Napolitano has the power to block the reform's passage by withholding his signature.

A group of university neuroscience researchers were also at the march.

One protester who identified herself only as Federica told CNN, "We are researchers in cognitive neuroscience and are not going to get our projects funded... plus a lot of hospitals where we carry on our research are going to close because of budget cuts."

Some estimates say the reform will result in 130,000 job losses in the education sector.