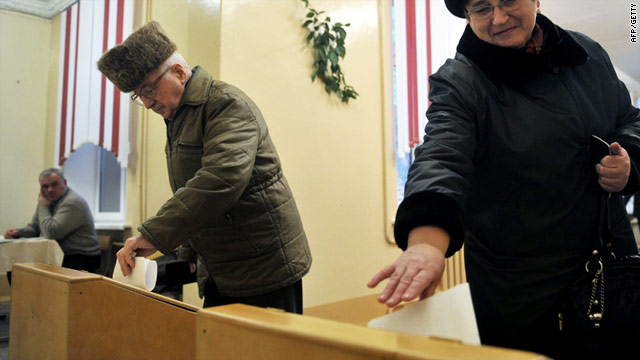 Belarusians cast their vote in Minsk on Sunday. The race will determine the political fate of Alexander Lukashenka.
STORY HIGHLIGHTS
RELATED TOPICS

Several hundred protesters were arrested and taken away by riot police, according to journalist Alexander Lukashuk. They were herded into about 20 trucks and driven off, he said.

The square outside government headquarters in Minsk was cleared of protesters as of about 11:50 p.m. (4:50 p.m. ET), he said, although a few hundred stragglers could still be seen waving flags in groups. Streets were closed and police cordoned off the area.

One demonstration was in support of presidential candidate Vladimir Neklyayev, according to the Russian news agency Interfax.

Neklyayev was hurt in clashes with riot police, another candidate, Nikolay Statkevich, told Interfax, and was taken away unconscious to his office. His spokeswoman, Yulia Ymashevskaya, told Interfax he had been badly beaten. Statkevich and Neklyayev's attorney were also injured, she said.

"I was beaten and Neklyayev was beaten and he lost consciousness," Statkevich told RIA-Novosti. He said the special forces used noise grenades and batons.

Authorities used stun grenades on the demonstrators as they headed toward the square, Interfax reported. However, several thousand people gathered in the square, chanting "For Belarus!" Some of them were waving flags with the symbol of the Christians Democratic Party, led by candidate Vitaly Rymashevsky.

Police were using force to push the protesters back and disperse them, Lukashuk said. He said no shots were fired, but beatings were taking place.

Police turned the downtown square into a skating rink to head off the protests, RIA-Novosti said. Organizers told supporters to bring salt and sand to throw on the ice.

Lukashenko, who has been in office since 1994, was running against nine other candidates, according to the Central Election Commission. National polls showed he enjoys wide support of the electorate.

Four of Lukashenko's nine rivals received a vote share of a little more than 3% each, BelTa reported.

Andrei Sannikov, a former diplomat who wants to see Belarus as a member of the European Union, was one of the main opposition leaders. The two others are Yaroslav Romanchuk and Neklyayev.

Economist Romanchuk, a candidate from the United Civil Party, has been prolific in publicizing his views on economic reforms. Meanwhile, Neklyayev ran a social campaign, "Tell the Truth!" He was arrested for participating in public protests earlier this year and later released.

Preliminary results show that at least 10% of eligible voters cast their votes early, as voting was held earlier this week for those unable to make it to the polls Sunday.

On December 4, state television broadcast live pre-election debates for the first time since the 1994 presidential race. Lukashenko and Neklyayev chose not to participate.

The contestants were also allowed two half-hour slots on prime time national television to address the Belarusians, according to a news release from the Ministry of Foreign Affairs. All candidates except for Lukashenko used this opportunity during the campaign.

In 2006, security forces cracked down on protesters in the aftermath of the elections, fearing the replication of a Color Revolution in Belarus. In neighboring Ukraine, the Orange Revolution deposed the regime of Leonid Kuchma two years earlier and the 2005 Tulip Revolution in post-Soviet Kyrgyzstan brought down President Askar Akayev and his government.

The Central Electoral Commission issued a statement Wednesday saying that it had accredited 1,015 international observers.

Many remained skeptical despite the unprecedented number of contestants and international observers invited to participate in the elections.

The Organization for Security and Cooperation in Europe has repeatedly expressed concerns over the status of civil and political rights in Belarus. Former U.S. Secretary of State Condoleezza Rice once called Lukashenko "the last dictator in Europe."