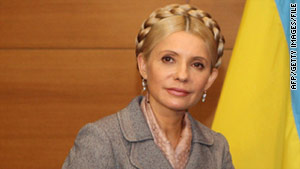 (CNN) -- Prosecutors in Ukraine have opened a corruption investigation into former Prime Minister Yulia Tymoshenko, she said Wednesday, accusing them of a "political witch hunt."

Authorities are looking into whether she diverted environmental funds toward pensions, she said.

She was questioned at the General Prosecutor's Office, she said in a statement on her website.

Tymoshenko was one of the leaders of Ukraine's "Orange Revolution" in 2005. She ran for president this year but lost to Viktor Yanukovych, one of her Orange Revolution opponents.

The two traded accusations -- and their supporters in parliament traded punches -- in April, when Yanukovych signed a deal allowing Russian military bases to remain in the country through 2042.

She's now leader of the opposition.

"The authorities continue to systematically terrorize the opposition without any respect for the law or Constitution," she said Wednesday.

"Criminal charges have been filed against me personally for allegedly spending environmental funds on pensions ... for committing a serious crime and paying pensions when the country was in a serious crisis," she said after being questioned, according to her website.

"Yanukovych ... will have to take responsibility for each act of repression against the genuine opposition, as well as for what he is doing today to all Ukrainian citizens," Tymoshenko added, according to the Russian news agency RIA-Novosti.

She was ordered to return for more questioning Monday, the agency said.