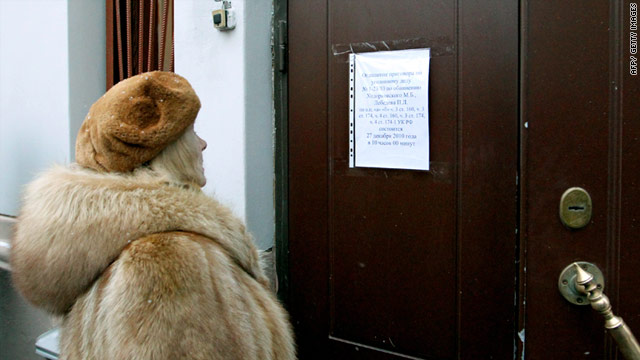 A woman reads a notice pinned to the court door announcing the postponement of Mikhail Khodorkovsky's corruption trial.
STORY HIGHLIGHTS

Moscow (CNN) -- The reading of the verdict in the corruption trial of former Russian oil tycoon Mikhail Khodorkovsky has been postponed until December 27, the judge's office said.

A note about the delay was posted on the courthouse door just hours before the court session was due to begin, as lawyers and journalists began lining up outside the building.

The court spokeswoman said she didn't know the reason for the postponement and learned about it herself from the written announcement at the court's entrance. The office of Judge Viktor Danilkin wouldn't explain the delay.

Khodorkovsky is the former head of the Yukos oil company, once Russia's largest oil producer. He is serving an eight-year sentence for fraud and tax evasion, having underpaid taxes on the oil his company produced.

Yukos was later broken up and absorbed by the state.

The verdict that had been scheduled for Wednesday is for a second trial that began in March 2009, in which he and his business partner, Platon Lebedev, are charged with embezzlement and laundering of stolen property. They are accused of stealing billions of dollars' worth of oil from Yukos production subsidiaries from 1998 to 2003, oil on which he's already been convicted of underpaying tax.

Khodorkovsky has already told the Moscow court that its decision will have an impact far beyond him and Lebedev.

"There is much more than just the fates of two people in your hands," Khodorkovsky said. "Right here and right now, the fate of every citizen of our country is being decided."

In October, prosecutors asked for a 14-year prison sentence but said it should include the eight-year term that Khodorkovsky is already serving, which will end in October 2011. With time served, the sentence could keep Khodorkovsky in jail until 2017.

That's where he served his first sentence.

But when new charges were brought against the two mean, both were moved to Moscow in 2009 to stand trial and were kept here even since.

The former oil magnate was previously incarcerated in a work camp near the town of Krasnokamensk, 4,000 miles (6,500 kilometers) from his native Moscow, but when the new charges were brought against the two men, both were moved to Moscow last year to stand trial.

Khodorkovsky had expressed a desire to run for office at the time and funded opposition political parties. He said the trial was part of a Kremlin campaign to destroy him and take the company he built from privatization deals of the 1990s. The Kremlin denied any role in his downfall.

The court also ordered Khodorkovsky and Lebedev to pay about $600 million in back taxes.

Few doubt that Khodorkovsky's prosecution has taken on a symbolism far beyond his own innocence or guilt. Critics say the embezzlement charges against him are absurd; analysts say Russia itself, and its commitment to the rule of law, is on trial.

"This verdict will be a verdict on whether Russia is a law-governed state, or whether it ever aspires to become one," said Masha Lipman of the Carnegie Endowment, "because currently it is not a law-governed state and the trial of Khodorkovsky and his partner Lebedev is the most striking example of it."

In his final address to the court, Khodorkovsky made a last impassioned appeal.

"For me, as for anybody, it is hard to live in jail, and I do not want to die there. But if I have to, I will not hesitate. The things I believe in are worth dying for," he said.