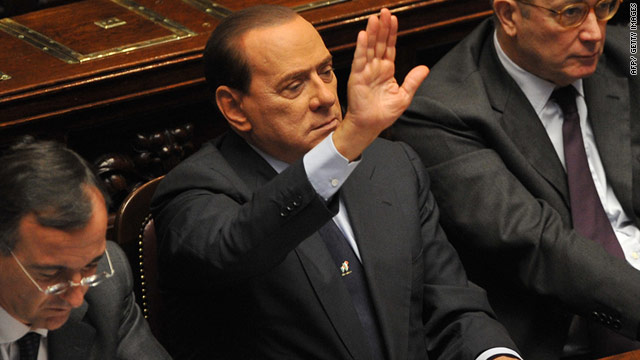 Rome (CNN) -- Embattled Italian Prime Minister Silvio Berlusconi retained his position by a narrow margin Tuesday after the nation's upper and lower houses of parliament voted in favor of him in a confidence vote.

With so many lawmakers aligned against Berlusconi, however, it may be difficult for him to carry on with his legislative program, said CNN's Dan Rivers.

"There is going to have to be a bit of horse-trading," he noted.

As the lower house vote total was announced, three loud explosions could be heard as protesters threw firecrackers or flash-bang devices at police lines assembled in the area, Rivers said. Several hundred protesters have amassed, and police had shut down a portion of central Rome.

There was no immediate reaction from Berlusconi. In a speech Monday to lawmakers, he made a last-ditch bid to save his political life.

In these particularly hard times for our country, we all have to find a way to be united and do what is best for the country.
--Italian Prime Minister Silvio Berlusconi.
RELATED TOPICS