Explosions in Stockholm believed to be failed terrorist attack 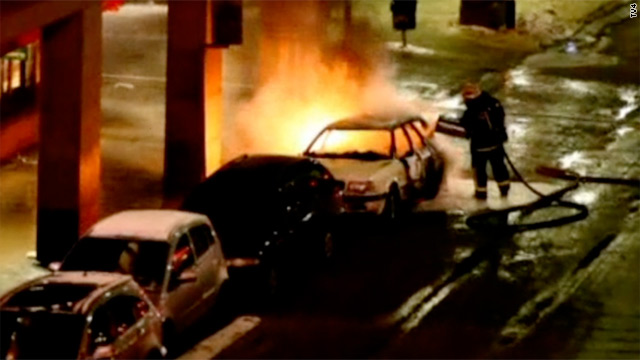 Police said the explosions were in a popular pedestrian shopping area.
STORY HIGHLIGHTS

(CNN) -- A failed terrorist attack in a central Stockholm district full of Christmas shoppers could have been catastrophic, Swedish authorities said late Saturday.

Police are investigating whether two explosions in Stockholm, an e-mail threat sent shortly before the attack that mentions Afghanistan and the body of a man who was apparently killed in one of the explosions are related.

"Most worrying attempt at terrorist attack in crowded part of central Stockholm. Failed -- but could have been truly catastrophic," Swedish Foreign Minister Carl Bildt said in a Twitter message on Saturday.

A Swedish news agency and police said they received e-mail threats against the Swedish people 10 minutes before the explosions, which killed one person and injured two others on Saturday.

"We have not taken any decision to increase the terror threat level," said Swedish Security Police spokesman Mikael Gunnarsson. "And apart from the e-mail we didn't have any other indications or threats that this would happen," Gunnarsson added.

The writer of the e-mail mentions the presence of Swedish troops in Afghanistan and a Swedish cartoonist who depicted the Prophet Mohammed, according to TT, a Swedish news wire.

"Our actions will speak for themselves," the person said in an audio recording attached to the email. "As long as you don't end your war against Islam and the humiliation against the prophet and with your stupid support to Lars Vilks the pig."

Swedish terrorism expert Magnus Ranstorp told CNN that he did not believe the attacker acted alone.

"This was not something where he just woke up and thought that he would blow himself up," said Ranstorp, a professor at the Swedish military academy and a former professor in terrorism studies at the University of St. Andrews in Scotland.

Police said the explosions were in a popular pedestrian shopping area.

"One explosion happened at the intersection of Drottninggatan and Olof Palmes Gata," two busy streets in central Stockholm, said police spokeswoman Petra Sjolander. "This was the car that exploded multiple times."

A second explosion occurred about five minutes later, at the intersection of Drottninggatan and Bryggargatan streets, Sjolander said.

An unidentified man was found dead at the scene of the second blast.

"We don't know at this point what caused the second explosion," Sjolander said, describing it as suspicious.

A bag was found near the body, she said.

"We had bomb technicians on site, but I can't give you any details of what they did," Sjolander told CNN.

A bomb robot rolled up to the body and removed the bag for examination, according to the Swedish newspaper Dagens Nyheter.

In the first incident, multiple blasts went off in a car, according to Sjolander.

"It is likely that this was some kind of gas tubes that have caused the car to explode multiple times," she said.

Two people at the site of the car explosion were taken to the hospital with minor injuries, she said.

Video on Sweden's TV4 showed flames spewing from the car, which was parked behind several others.

The e-mail writer ended the message with a call for action "to all Mujahadeen in Europe and Sweden," TT said.

"Now is the time to strike, don't wait any longer," the message read, according to TT. "Step up with whatever you have, even if it is a knife, and I know you have more than a knife. Fear no one, fear not prison, fear not death."

TT said that it was not clear from the e-mail or the audio files if the person belongs to any specific organization.

The person claimed to have been to the Middle East and asked family for forgiveness for lying to them. "I didn't go to the middle east to work," the writer wrote. "I went there for jihad."