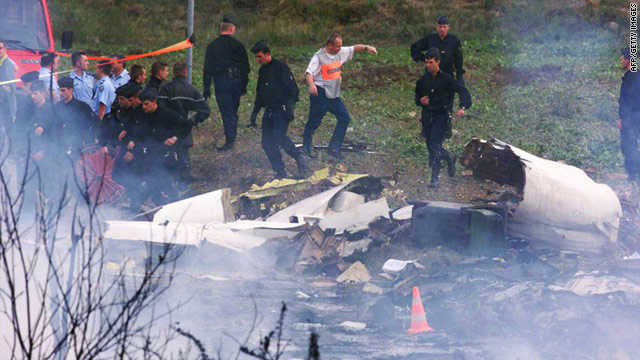 Policemen stand among the debris of the Concorde that crashed near Paris on July 25, 2000.
STORY HIGHLIGHTS

Paris, France (CNN) -- The fiery crash that brought down a Concorde supersonic jet in 2000, killing 113 people, was caused partially by the criminal negligence of Continental Airlines and a mechanic who works for the company, a French court ruled Monday.

Continental Airlines was fined 202,000 euros ($268,400) and ordered to pay 1 million euros to Air France, which operated the doomed flight.

The aircraft manufacturer EADS was also found partly responsible for the crash and ordered to pay 30% of damages to victims involved in the case.

Air France has already paid an unspecified sum in damages to the families of most of the victims of the only crash ever of a Concorde.

The mechanic was the only person found guilty in the trial before a judicial panel in the Paris suburb of Pontoise. He was not present for the verdict.

His former supervisor, Stanley Ford, and three French officials were found not guilty of involuntary manslaughter.

Henri Perrier, Jacques Herubel and Claude Frantzen were responsible for the design, testing and certification of the Concorde.

The charges had said the engineers could have acted much earlier to correct well-known design flaws in the plane.

Lawyers for Continental and Taylor rejected the guilty verdicts.

"I am shocked by this verdict, Taylor's lawyer Francois Esclatine said. "I haven't had a chance to speak with my client yet, but I will tell him that he should appeal."

Olivier Metzner, a lawyer for Continental, said the airline "will not let itself be pushed around in this way and we will definitely appeal."

The airline called the verdict "absurd" in a statement.

Saying that the airline and Taylor were "the sole guilty parties shows the determination of the French authorities to shift attention and blame away from Air France," which operated the flight and maintained the aircraft, Continental said.

"To find that any crime was committed in this tragic accident is not supported either by the evidence at trial or by aviation authorities and experts around the world," the statement said.

Air France, which was a plaintiff in the Concorde trial, posted a statement on its website saying, the French national carrier "welcomed the decision of the criminal court which recognizes Continental's full criminal and civil liability in the Concorde accident."

The Concorde burst into flames and smashed into a hotel on takeoff on July 25, 2000. Air France stopped flying the supersonic jets in 2003.

A Continental Airlines plane that took off shortly before the doomed flight was found to have played a key role in the crash.

A titanium strip allegedly fell off a Continental DC-10 which took off just before the Concorde. Judicial investigators say the strip was improperly installed on the DC-10 engine, prompting the charges against the airline, Ford and Taylor.

A lawyer for the American airline had argued that Concorde's problems were apparent decades before the crash and that Continental was not to blame.

An investigation revealed a tragic chain of events that brought down Air France Flight 4590 shortly after takeoff from Paris' Charles de Gaulle airport: a tire under the left wing blew on takeoff when it struck the small strip of titanium on the runway.

The blown tire sent debris into the wing, causing the fuel tank to rupture and sparking the catastrophic fire that led to the crash that killed 100 passengers, nine crew and four people on the ground.