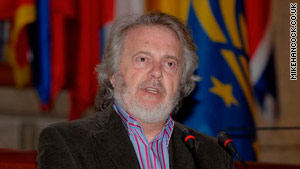 Lawmaker Mike Hancock, above, said Katia Zatuliveter was "vetted and cleared to have a parliamentary pass"
STORY HIGHLIGHTS

London, England (CNN) -- An aide to a British lawmaker has been arrested and is facing expulsion from the country, the member of Parliament said Sunday, but he denied that she is a secret agent.

"She is not a Russian spy," Liberal Democrat MP Mike Hancock said Sunday of his aide Katia Zatuliveter.

She was detained Thursday, he said. The arrest did not become public until Sunday.

"I know nothing about espionage, but she has been subjected to a deportation order," he said. "She is appealing it, because she feels -- quite rightly -- that she has done nothing wrong."

Zatuliveter has been working for Hancock for more than two years and was "vetted and cleared to have a parliamentary pass," the lawmaker said.

"It is difficult to understand the reasons for all this. She has been an excellent and conscientious employee," Hancock said in a statement, wishing her well.

"It is now in the hands of her lawyers. I am sure that in the end she will be proved to be right," Hancock said.

The Home Office -- which is responsible for domestic security and speaks for MI5 -- declined to comment on the allegations, saying it did not routinely comment on individual cases.

Russia's secret service, the FSB, and the Russian Foreign Ministry also declined to comment on the case.

Hancock represents the southern section of the English city of Portsmouth on the south coast.

He has been a member of Parliament since 1997. The Liberal Democrat party to which he belongs has been the junior partner in a British coalition government since May.

He lists Russia, Ukraine, Moldova and Romania among his interests, and is active in lawmakers' groups focused on NATO and Western Europe.

CNN's Per Nyberg and Arkady Irshenko contributed to this report.