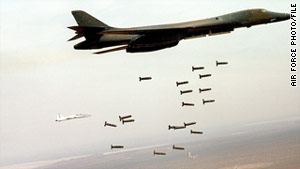 Washington (CNN) -- The British government offered the United States a deal to temporarily store cluster munitions at a military base on its soil, despite having signed a treaty banning such storage, according to a State Department cable published by WikiLeaks.

The proposal was discussed in a May 2009 State Department cable published by the website.

The cable was written after Britain signed on to the Convention on Cluster Munitions -- which bans the use, stockpiling, transfer, and production of cluster munitions -- but before the treaty had been ratified by Parliament. In the cable, a British official suggested it would be better for both governments to withhold the information from Parliament and not reach a final agreement on what the cable described as a '"temporary agreement" until after the treaty was ratified, which did happen.

The reason for this was to avoid "complicating/muddying the debate" by indicating that the request for the United States to remove its cluster munitions by 2013 was "open to exceptions," according to the cable.

Responding to reports concerning the WikiLeaks material, a British Foreign Office spokesman denied the the government misled or failed to inform Parliament but would not elaborate beyond saying, "We condemn leaks of classified information."

But Thomas Nash, coordinator of the Cluster Munition Coalition -- an international network of more than 200 organizations working to ban the use of cluster munitions.-- said, "It's disturbing that the U.S. is seeking to determine British policy on cluster munitions."

"Britain is bound by the Convention on Cluster Munitions and should not be assisting the U.S., or any other country, in using the weapons." Nash said.

Most of a device's bomblets are meant to explode on impact, but many do not. Credible estimates show the weapons fail between 10 and 40 percent of the time, leaving civilians at risk of harm from unexploded ordnance, the Red Cross says.

The 2009 cable noted that the exception to the treaty would operate on a "case-by-case temporary storage" basis for specific missions.

Nicolas Pickard and Andrew Ford, two British officials from Britain's Foreign and Commonwealth Office Security Policy Group, confirmed that the concept had been "accepted at the highest levels of the government," noting that the idea had been included in a draft letter from then-British Foreign Minister David Miliband to Secretary of State Hillary Clinton.

The criteria and timetable for the exception are explained in the 2009 cable.

"Any U.S. cluster munitions currently stores on British territory (either UK territory proper, Diego Garcia, or elsewhere) would be permitted to stay until 2013, while any new cluster munitions the (U.S. government) wanted to bring to those sites after the treaty's entry into force for the UK -- either before or after 2013 -- would require the temporary exception."

Diego Garcia is a British territorial island in the Indian Ocean where the United States has a military base with more than 3,000 military and civilian personnel.

A separate cable from December 2008 reveals that Afghan President Hamid Karzai went back on his assurances to U.S. diplomats in Kabul that he wouldn't sign the treaty. The cable alleges Karzai overruled his own foreign minister at the last minute and signed the treaty, "without prior consultation from the (U.S. government) or other key states engaged in operations in Afghanistan."

The United States did not sign the treaty because "cluster munitions continue to have military utility." The 2008 cable, signed by then-Secretary of State Condoleezza Rice, also said, "We believe that the elimination of cluster munitions from our stockpiles would put the lives of our soldiers and those of our coalition partners at risk."

The cable points out that "many of our NATO Allies and other key partners share this interpretation."

The cable also points out that the United States is working to address the humanitarian impact of unexploded cluster munitions. It points out to a 2008 Pentagon policy signed by Secretary of Defense Robert Gates that U.S. forces would only use cluster munitions that, after arming, would result in a maximum of 1 percent unexploded ordnance by 2018.

It also notes that the State Department and the U.S. Agency for International Development continue their work in protecting civilians from unexploded cluster munitions, and that the United States has provided nearly $167.5 million in funding for munitions clearance and victims assistance programs in Afghanistan.

Afghanistan has signed the cluster munitions treaty but has not yet ratified it, according to the Cluster Munition Coalition.