Jewels of a royal love affair go up for auction 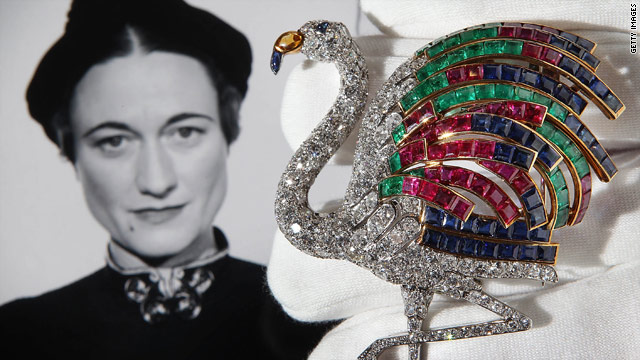 A diamond flamingo brooch with feathers of rubies, sapphires and emeralds is estimated to go for between £1 and 1.5 million.
STORY HIGHLIGHTS

London, England (CNN) -- They are the jewels of a royal love affair, one that led Britain's King Edward VIII to abdicate the throne more than 70 years ago so he could marry the woman he loved.

Now, the diamonds, gold, and precious gemstones that expressed the love between Edward and American Wallis Simpson are going up for auction.

The 20 items being offered at Sotheby's in London on Tuesday include 11 pieces by Cartier, some of which are estimated at more than £1 million ($1.5 million) each.

I have found it impossible to carry the heavy burden of responsibility and to discharge my duties as king, as I would wish to do, without the help and support of the woman I love.
--King Edward VIII in 1936
RELATED TOPICS

One of the pieces she created was an onyx and diamond bracelet in the form of an elongated panther. Designed in 1952, the bracelet was among the finest of Toussaint's "great cats" jewels and is in the sale at an estimated £1-1.5 million ($1.5-2.3 million).

Also up for sale is a diamond flamingo brooch with feathers of rubies, sapphires and emeralds, and a beak of citrine. The brooch, also estimated between £1 and 1.5 million, was the showpiece of an earlier sale of the couple's jewels, held in Geneva in 1987.

All the items up for auction Tuesday belonged to a single owner, but Sotheby's did not disclose that person's identity.

Cartier also created a six-piece diamond-encrusted dress suite comprising a pair of cufflinks, three dress buttons and a stud, given by Simpson to Edward in 1935 to wear for the Royal Silver Jubilee celebrations and his birthday.

Each cufflink features an E on one end and a W on the other. One of the buttons is inscribed on the back with the phrase "Hold Tight," a favorite phrase of the couple in their correspondence before marriage.

Another gift Simpson gave to her husband traces the routes of European trips they had taken together on an 18-carat gold and gem-set cigarette case. Each city is marked with a gem or diamond and is connected to the next by enamel lines.

The inscription on the back reveals it was a Christmas present in 1935.