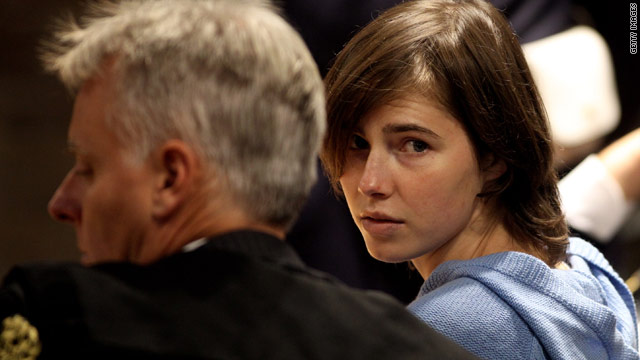 Amanda Knox speaks to her legal team on Wednesday during her appeal against her murder conviction.
STORY HIGHLIGHTS

She is tense and has lost weight, her lawyer, Luciano Ghirga, told reporters.

And she is facing a difficult legal battle, he said.

Rather than prosecutors having to prove she is guilty, "we have to prove her innocence, which is more difficult to do," Ghirga said.

Her stepfather, Chris Mellas, said she had a "a very strong appeal" and there were "ample grounds for Amanda's release."

He said he experienced deja vu walking back in the court where she was convicted nearly a year ago and seeing "a new jury, new judge -- new judges. Unfortunately the old prosecutor, still, but you can't get everything."

The hearing lasted about 15 minutes before the judge adjourned it until December 11 because one of the lawyers was not present.

Knox, 23, was sentenced last December to 26 years in prison for the killing of Meredith Kercher at the villa they shared in Perugia, the central Italian town where both were students.

Kercher, 21, was found in November 2007, semi-naked with her throat slashed. Knox and her former Italian boyfriend, Raffaele Sollecito, were both found guilty of the murder.

A third person, Rudy Guede, a drifter originally from the Ivory Coast, was tried separately and is serving a 16-year prison sentence.

"Of course, this is a phase in which they want to remember Meredith and think about Meredith and they hope to be able to just dedicate themselves to her memory without having to deal with trials anymore," he said.

Knox's family said in April that she is innocent and that no forensic evidence puts her at the crime scene.

"Meredith was Amanda's friend," the family said. "They liked each other and spent time together when not in school. Amanda would not hurt Meredith."

The family said the appeal would detail "a lot of conjecture in these motivations, a number of discrepancies as well as a number of inconsistencies and contradictions; as well as conclusions not supported by evidence."

Jurors said they believed Knox played a role in the killing but that the death was not premeditated, according to a report released in April by the judges in the case.