Scotland Yard: Cartridge bomb might have exploded over Eastern U.S. 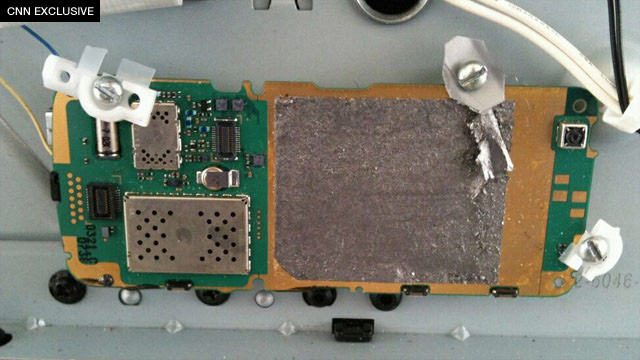 London, England (CNN) -- An explosive device found in a cargo plane in England last month probably would have exploded over the Eastern Seaboard of the United States if it had not been discovered, Scotland Yard said Wednesday.

The device was primed to explode about six hours after it was found, a senior U.S. counterterrorism source told CNN.

"Forensic examination has indicated that if the device had activated it would have been at 10:30 hrs BST on Friday, 29 October 2010," the Scotland Yard statement said. "If the device had not been removed from the aircraft the activation could have occurred over the eastern seaboard of the U.S."

Al Qaeda in the Arabian Peninsula, the Yemen-based arm of the al Qaeda terrorist network, claimed responsibility last week for the plot to send explosive devices on cargo planes bound for the United States.

White House spokesman Nick Shapiro said the findings by British authorities "underscore the serious nature of the attempted AQAP attack and the challenge we all face in trying to prevent or disrupt such attacks."

Shapiro cited "the collective efforts of many dedicated intelligence and law enforcement professionals" in the United Kingdom, the United Arab Emirates, Saudi Arabia and the United States for disrupting the attacks.

"The United States will continue to work closely with these partners and the government of Yemen to address and counter the threat posed by AQAP as well as to provide humanitarian and economic assistance to help shape a stable and secure Yemen," Shapiro said.

In a similar statement later Wednesday, Homeland Security Secretary Janet Napolitano noted the United States increased screening requirements for air cargo this week and has worked in the past year to make air security a global issue by working with the International Civil Aviation Organization.

Authorities in the United Arab Emirates and Britain found two explosives-laden packages sent from Yemen on October 29 that were addressed to synagogues in Chicago, Illinois.

The statement by al Qaeda in the Arabian Peninsula claimed responsibility for the two cargo explosives, as well as the September 3 crash of a UPS plane near Dubai in the United Arab Emirates.

It said that because Western media did not link the September crash to the group, "we decided not to announce it so we could carry on a similar operation."

In a security bulletin dated Tuesday, the Department of Homeland Security and the FBI concluded the AQAP statement was authentic, but they dismissed the group's claim that it was involved in the September UPS plane crash.

"We assess the statement is authentic and AQAP's claim of responsibility for shipping the two explosive-laden packages discovered and disrupted on 29 October 2010 is credible," the bulletin said. "The group likely considers the plot a success since its devices evaded cargo screening procedures and likely will cause Western nations to implement costly security countermeasures."

According to the bulletin, AQAP's "assertion of responsibility for the 3 September 2010 crash of a UPS cargo plane in Dubai is false."

Also Wednesday, a U.S. official said there was no evidence so far that the September 3 UPS crash near Dubai involved terrorism.

"It is not surprising that they would issue such a claim of responsibility," the official said of the AQAP statement. "As we have said, we are continuing to take another look at the Dubai crash but nothing thus far has indicated any nexus to terrorism. The available information continues to indicate that the crash was an accident."

On October 31, the UAE government announced an investigation of the crash by its General Civil Aviation Authority had eliminated the possibility that an on-board explosion was the cause.

The two devices that were found on cargo planes, both loaded with the powerful explosive PETN, were packed in computer printer toner cartridges and designed to be detonated by a cell phone, a source close to the investigation has said.

U.S. investigators believe that al Qaeda bombmaker Ibrahim Hasan al-Asiri, 28, is linked to the packages, according to a federal official who was briefed by authorities. Al-Asiri, who is thought to be in Yemen, is a Saudi who ranked high on Saudi Arabia's list of most wanted fugitives published in February 2009. He is also believed to be the bomber who designed last year's failed attempt to blow up a U.S. airliner as it landed in Detroit, Michigan, on December 25.

A U.S. official said that the devices found in the packages last month were very sophisticated and could have exploded in flight, but it wasn't clear whether that was the intent.

After the incidents, U.S. government authorities grounded packages originating from Yemen destined for the United States. Yemen has asked for outside help to thwart terror groups, but the country, the ancestral home of Osama bin Laden, is still used for operations, U.S. officials say.