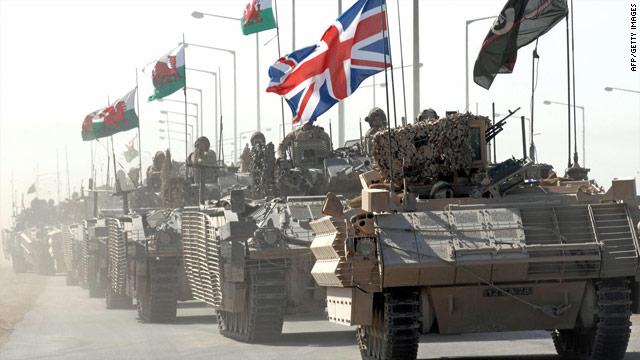 London, England (CNN) -- Scores of Iraqis who claim they were abused by British troops are demanding an independent inquiry into their treatment, via a lawsuit against the British government this week.

At least 125 Iraqis allege they were subjected to mistreatment including sleep deprivation, hooding, being forced to stand or kneel in stress positions, or being exposed to "loud pornography."

The mistreatment was not the work of rogue soldiers disobeying orders, but part of a "deliberate policy of abuse being used to assist interrogation," lawyer Philip Shiner argues.

The "allegations indicate systematic abuse of detainees which reflect policies of the Armed Forces or at least tolerated and widespread practices," he says in court papers.

He showed interrogation videos in court on Friday and planned to introduce more evidence Monday and Tuesday, he told CNN.

The allegations center on a unit known as the Joint Forward Interrogation Team, about which Shiner says he has been able to obtain little information.

In court papers he says it was responsible for detainee interrogation and control, calling it "effectively a black hole, a segregated and tightly controlled environment operating under a separate chain of command."

The Ministry of Defence did not immediately respond to CNN questions about the interrogation team.

The European Convention on Human Rights requires the government to establish an independent investigation in the abuse allegations, Shiner says.

Defence Minister Liam Fox, the defendant in the High Court case, is "very concerned" by allegations of abuse and is determined to "get to the bottom" of all such allegations, his lawyers said Monday.

But he does not believe he is under "any present obligations to set up a public inquiry."

The Ministry of Defence says the Royal Military Police are investigating allegations case by case.

A two-year project under its jurisdiction, known as the Iraq Historic Allegation Team, was announced earlier this year.

Fox believes that process is "desirable and appropriate" in investigating abuse allegations, and has made "significant progress" since it was established, government lawyers said.

The Historic Allegation Team "is the most effective way of investigating these unproven allegations -- to establish their truth or otherwise, identify any action that needs to be taken, including dealing with any connected or systemic issues and, should it uncover criminal behavior, provide the proper means to deal with it," said Brigadier John Donnelly of the ministry's Judicial Engagement Policy department.

"In our view a costly new public inquiry is not necessary or appropriate. It would be unable to investigate individual criminal behavior or impose punishments and will not serve the interest of fair and expeditious justice," he said in a statement.

Shiner says that investigation is only putting off an inquiry that is certain to come.

"There is no justification for delaying the inevitable," he argues in court papers.

He says the military's investigation is not sufficiently independent.

And sending cases through the Iraq Historic Allegation Team before setting up an independent probe "offends" the European Convention on Human Rights requirement for prompt investigations in allegations of abuse, he says.

The case opened Friday and is due to continue through Tuesday. It is not clear when the judge will rule.

CNN's Bharati Naik and Andrew Carey contributed to this report.