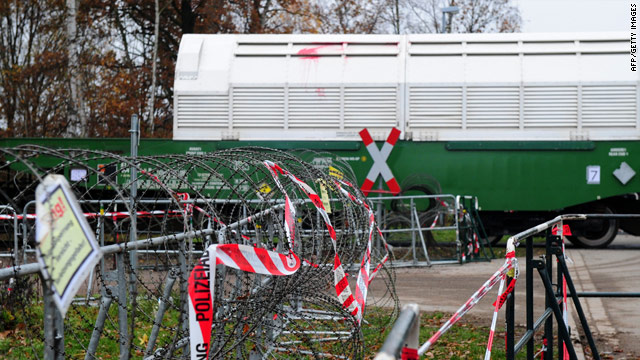 (CNN) -- A train carrying nuclear waste in Germany is back on the move Monday after thousands of protesters blocked the track by sitting on it.

Demonstrators have been angry about the storing of nuclear waste in Germany as well as an extension on the life of the nation's nuclear plants. Protests have turned violent in some areas.

"The train is now moving again in the direction of Dannenberg, on the stretch between Dahlenberg and Dannenberg," Nicole Ramrath of Lueneburg police said Monday.

The majority dispersed, but several hundred protesters had to be carried off the track and kept in an outdoor detention area to keep them from returning, Ramrath said.

The train left France on Friday, headed for Gorleben. It's the 11th such transport in the past three decades, but the shipment has provoked outrage in Germany after the government announced in September it would extend the life of the nation's 17 nuclear power plants by 12 years. They were due to be decommissioned in 2020.

After completing a 50-kilometer (31-mile) trip from Lueneburg to Dannenberg by rail, the shipment will be unloaded onto trucks and driven to the storage site at Gorleben, in north-central Germany about 209 kilometers (130 miles) northwest of Berlin.

On Monday, about 1,500 people were still sitting on the road at Gorleben waiting for the lorries to come. Several tractors along the route also tried to block the shipment.

Over the weekend, protesters attacked police with sticks and pepper spray along various stretches of the route in the Wendland area, and the authorities responded in kind, Ramrath said. In Harlingen, officers on horseback were brought in to control the crowds, and water cannons were used against the protesters in various areas. Demonstrators set a police vehicle on fire, Ramrath said.

Ramrath had no information on how many people were arrested, and would not say how many police were brought into the area.

On Friday, protesters blocked the train in northwestern France, chaining themselves to the tracks on which it was traveling, authorities said. Four French protesters and one German halted the shipment near a train station in Caen. The train stopped well before the site where the protesters were chained, and the demonstrators were removed by police, authorities said.

The anti-nuclear organization and Greenpeace ally GANVA, or the Non-Violent Anti-Nuclear Action Group, claimed responsibility for the French protest. On its website, GANVA said its members took the action because "nuclear waste exposes the population to unmeasurable risks."

In making the announcement in September that the use of German nuclear plants would be extended, Chancellor Angela Merkel said the change was part of a "revolutionary" new energy policy which will lead toward an era of renewable power.