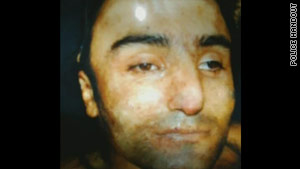 Turkish authorities released a photo of the bomber and identified him as Vedat Acar, a member of the PKK.

Istanbul, Turkey (CNN) -- Turkish authorities have identified the man who they say detonated explosives in busy square in downtown Istanbul on Sunday morning, killing himself and wounding at least 32 people.

"His name Vedat Acar, born in 1986 from the Gurpinar district of Van," said Nazir Senturk, a spokesman for the governor of Istanbul.

Van, one of Turkey's easternmost border provinces, is populated predominantly by ethnic Kurds.

The PKK, or Kurdistan Workers Party, has been fighting a guerrilla war against the Turkish state since the early 1980s. More than 30,000 people, most of them ethnic Kurds, have been killed in the conflict.

Senturk would not comment on whether Acar was an active member of the PKK at the time of his death. Turkish police released a photo of the suspected suicide bomber Monday.

Also Monday, a PKK spokesman in northern Iraq denied any links to the bombing in Istanbul's Taksim Square.

Instead, Roj Welat said the Kurdish separatist movement would extend its unilateral cease-fire until after Turkey holds general elections, expected to take place in summer 2011.

The Taksim Square bombing occurred the same day that the PKK cease-fire was expected to end, raising suspicions in the Turkish media.

In a statement Tuesday, Turkish President Abdullah Gul called on citizens to stand "in unity against terrorism."

But he also sounded a conciliatory note toward the PKK's cease-fire announcement, saying, "I hope the decision to lay down arms is permanent."

Monday night, a small group of well-wishers placed candles on the pavement in Taksim Square and held a vigil for victims of the attack.