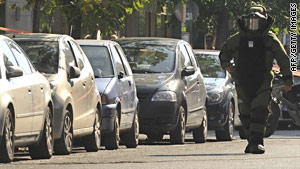 A police bomb disposal expert prepares for a controlled explosion of a suspect parcel in Athens a day earlier.
STORY HIGHLIGHTS

The incidents come a day after one person was wounded when a parcel bomb addressed to Greece's Mexican Embassy exploded.

The object at the Swiss Embassy on Tuesday was a small bomb that was thrown into the building's courtyard, police said.

A separate explosion happened outside the Russian Embassy, police said. It wasn't immediately known what type of device caused that explosion. No one was injured in either incident.

Meanwhile, authorities said they detonated a package at the Bulgarian Embassy and a suspicious package addressed to the Chilean Embassy, after a courier carrying the latter parcel thought it might contain an explosive device.

The third parcel was addressed to the German Embassy, but it was detonated near a courier office because embassy officials thought it might be a parcel bomb and sent it back, police said.

Monday, a parcel bomb addressed to the Mexican Embassy exploded at the same private courier company and wounded a woman there.

Two suspects were arrested Monday after police cordoned off the surrounding area, the ministry said. Both were wearing wigs and one of them was wearing a bulletproof vest.

Both also were carrying Glock 9mm pistols and were in possession of two other explosive parcels, including one addressed to French President Nicolas Sarkozy, the ministry and police said. The other was addressed to the Belgian Embassy.

The packages were detonated by police.

The arrested men are in their early 20s and are both Greek nationals, police said. One of them is a suspected member of the Greek leftist militant group Conspiracy of the Cells of Fire.

Another parcel bomb was found nearby Monday at another courier company in the same area. It was addressed to the Dutch Embassy.