From Elinda Labropoulou, For CNN 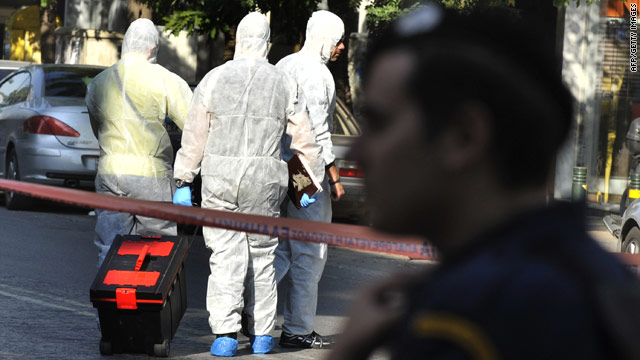 Police investigators collect evidence at the offices of a courier company in Athens on November 1.
STORY HIGHLIGHTS

Athens, Greece (CNN) -- One person was wounded Monday when a parcel bomb exploded at a private courier company in Greece, according to the nation's Public Order Ministry.

The woman suffered mild wounds to her hands when the bomb exploded as she was moving packages, the ministry said. The package was in an envelope addressed to the Mexican Embassy. Police said it was delivered by two men.

Two suspects were arrested after police cordoned off the surrounding area, the ministry said. Both were wearing wigs and one of them was wearing a bulletproof vest. Both also were carrying Glock 9mm pistols and were in possession of two other explosive parcels, including one addressed to French President Nikolas Sarkozy, the ministry and police said. The other was addressed to the Belgian embassy.

The packages were detonated by police.

The men arrested are ages 22 and 24, and both are Greek nationals, police said. One of the men is a suspected member of the Greek leftist militant group Conspiracy of the Cells of Fire.

Meanwhile, another parcel bomb was found nearby at another courier company in the same area. It was addressed to the Netherlands Embassy.

Authorities were examining video from the first courier company in an effort to identify the person who delivered the envelope, the ministry said.