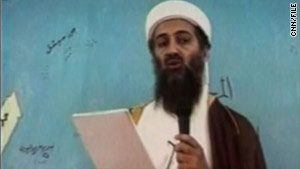 Bin Laden warns France to get out of Afghanistan.
STORY HIGHLIGHTS

Paris, France (CNN) -- A tape of a man claiming to be Osama Bin Laden threatening France appears to be authentic, the French Foreign Ministry said Thursday.

Bin Laden warned France to get its troops out of Afghanistan and not to oppress Muslims at home in a tape broadcast by the Al-Jazeera network Wednesday.

"This message only confirms the reality of the terrorist threat against which the French authorities have taken and continue to take appropriate measures," the ministry said in a statement Thursday.

"French authorities are fully mobilized to secure the release of seven hostages kidnapped in Niger on September 16. These statements by Bin Laden will not affect our assessment of the situation of our hostages and obviously will, therefore, not erode our efforts to secure their release. France will continue to fight against terrorism alongside its partners," the ministry said.

Five French nationals were kidnapped last month along with a person from Togo and one from Madagascar. A photograph of them was posted September 30 on a website linked to al Qaeda.

An opposition lawmaker Wednesday urged "contempt towards these terrorists.

The tape is audio only. The speaker does not appear. CNN was not able to confirm that it is really Osama Bin Laden, the head of al Qaeda.

The France's terror alert level is red, the second highest, authorities say. It did not change immediately in response to the new tape.