Corruption survey: Somalia is the worst 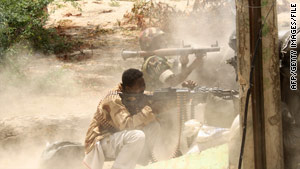 (CNN) -- Denmark, New Zealand and Singapore are seen as having the least corruption in the world, according to a just-published global survey.

Somalia is viewed as the most corrupt country.

The Corruption Perception Index (CPI) is published annually by Transparency International, a corruption monitoring organization based in Berlin, Germany.

"The surveys and assessments used to compile the index include questions relating to bribery of public officials, kickbacks in public procurement, embezzlement of public funds and questions that probe the strength and effectiveness of public sector anti-corruption efforts," said a release accompanying the 2010 CPI.

Denmark, New Zealand and Singapore each scored 9.3 out of a possible 10.

"With governments committing huge sums to tackle the world's most pressing problems, from the instability of financial markets to climate change and poverty, corruption remains an obstacle to achieving much needed progress."