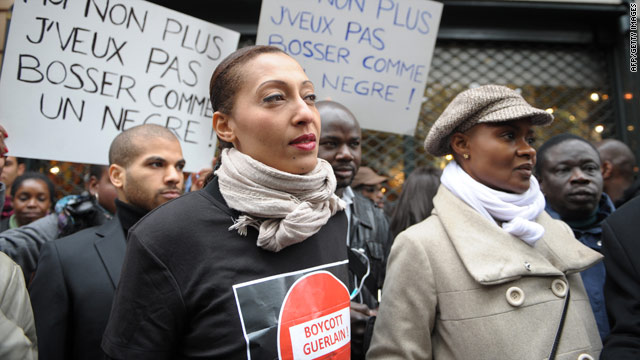 Paris, France (CNN) -- Dozens of protesters wearing black crowded the sidewalk Saturday outside the Guerlain boutique in Paris, France, calling for a boycott of the cosmetics company following racist remarks made by a former executive on French TV this month.

Jean-Paul Guerlain -- who is no longer connected with the company that bears his name -- uttered a racial slur twice during an October 15 interview on France 2 about his career and the making of the Samsara perfume.

Guerlain has apologized for the comments, saying, "My words do not reflect in any way my profound thoughts but are due to an inopportune misspeaking which I vividly regret."

The racial epithet was used as he was describing how he was inspired to create the perfume while trying to impress a woman.

"One day I told her -- and I still called her Madame -- 'What would seduce you if one was to make a perfume for you?' and she told me, 'I love jasmine, rose and sandalwood,' " Guerlain recalled. "And for once I started working like a [racial epithet]. I don't know if [racial epithet] ever worked that hard," he said.

Saturday's protest was mobilized by a Facebook group called Boycott Guerlain, which called on protesters to don black and gather outside the boutique on Paris' famed Champs-Elysee.

Protesters carried signs reading, "No to racism" and "Boycott Guerlain!" and discarded Guerlain products outside the store.

The demonstration comes the same day that civil rights activist Al Sharpton announced he has accepted an invitation to address international anti-racism activists in Paris next month.

"The fact that Jean-Paul Guerlain felt comfortable enough to use the N-word in public, coupled with a recent United Nations report showing that racism is on the rise in France, illustrates the depth of racism not only in France but throughout Europe and around the world," Sharpton said in a statement posted on the website of his National Action Network.

Sharpton said he has also requested a meeting with the chairman and CEO of the company that purchased Guerlain in 1994.

According to a Guerlain company spokesperson, Guerlain has not been an employee since 2002. He now counsels the company as a "nose" for some perfumes.

Other groups have also denounced Guerlain's comments, and at least two -- SOS-Racisme and the Council Representative of Black Associations -- plan to file a legal complaint against him.