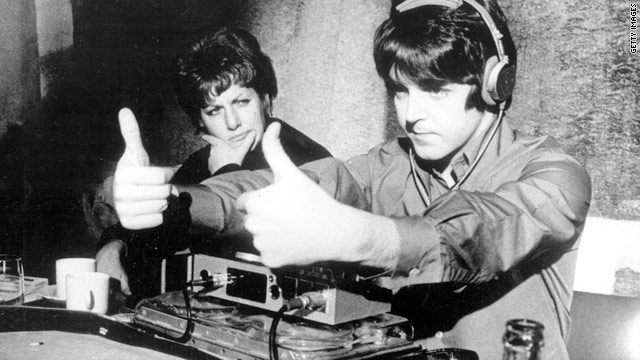 Beatle Paul McCartney in 1968. Scientists are working on a formula they say could be used to create perfect pop songs.
STORY HIGHLIGHTS
RELATED TOPICS

(CNN) -- They are the irritating jingles from car insurance commercials that get lodged in your head when you're trying to concentrate. Or the motivational soundtracks you hear when you're jogging, even when you've left the iPod at home.

Now researchers in London believe they are on course to crack the code which determines why some tunes, known as earworms, seem to get stuck on repeat inside our brains. They say the results of their studies could be used to compose the perfect pop song, as well as enhancing our understanding of how the brain processes music.

More than 90 percent of people are estimated to experience earworms regularly, according to one recent study. The phenomenon has also been described as "sticky music," or as a "cognitive itch" which can only be scratched by constant mental repetition of a particular tune.

In an effort to learn more about the phenomenon, the research team at Goldsmiths, University of London, is asking web users to share their experiences in an online "Earwormery."

Send your earworm experiences to the Earwormery

Chris Difford of pop band Squeeze, responsible with co-writer Glenn Tilbrook for hits such as "Cool for Cats" and "Up the Junction," told CNN he woke up with earworms every morning.

"I don't know where they come from. You just wake up and there they are," said Difford. "And I should keep a diary of them because they're quite fascinating. This morning it was 'Waterloo' by Abba. Which was extremely annoying because I've never liked it."

But Difford said not all earworms were so unwelcome. "There was a Jimi Hendrix song in my head the other week and I wouldn't call that an earworm. It was a thing of beauty -- more like an ear butterfly."

But while, for most, earworms are mildly annoying at worst, for a few people they can be genuinely disturbing. In extreme cases of auditory hallucination, sufferers cannot differentiate between music generated externally and inside their own heads.

One case study, published last year in the Journal of Psychiatry and Clinical Neurosciences, records the example of a 21-year-old Indian man who had music from Bollywood films stuck in his head every day for five years.

Lauren Stewart, who co-directs a masters degree course in Music, Mind and Brain, said that earworms remained largely a mystery to psychologists. Some instances could be linked to certain thought processes, such as a song lyric relevant to your situation that comes to mind. But often earworms appeared to be completely random.

"What's interesting to us is the fact that this spontaneous musical imagery comes without any conscious effort -- as if from nowhere. At the moment, we're still trying to figure out why that happens," she said.

Renowned neurologist Oliver Sacks has speculated that earworms could be a consequence of the near-ubiquitous presence of music in modern life, from shopping mall muzak to cellphone ringtones.

"This barrage of music puts a certain strain on our exquisitely sensitive auditory systems," writes Sacks in his book, "Musicophilia."

"One such consequence is the omnipresence of annoyingly catchy tunes, the brainworms that arrive unbidden, and leave in their own time -- catchy tunes that may be nothing more than advertisements for toothpaste but are, neurologically, completely irresistible."

Vicky Williamson, who is leading the Earwormery project, said the results would enable them to learn whether particular personality types or life experiences make some people more susceptible than others and whether there are particular "high-risk" everyday circumstances that make earworms more likely.

By analyzing common characteristics of the tunes reported as earworms, the researchers are also working on a formula to determine the "stickiness" of a piece of music.

Their findings so far suggest that stickiness results from a particular balance of certain pitch intervals and particular rhythmic structures. The formula can currently predict whether a tune is likely to be an earworm with approximately 75 percent success, said Goldsmiths Music, Mind and Brain Co-Director Daniel Müllensiefen.

Müllensiefen, also scientist in residence at advertising firm DDB UK, said there was a growing awareness of the importance of "sonic branding" -- memorable, or irritating, tunes or melodies associated with a particular product or company -- in the advertising industry.

But he said the formula might eventually enable songwriters or musicians to fine-tune their compositions for more noble goals.

"By studying earworms we really can decode the DNA of a pop song that perfectly lodges in our memory," said Müllensiefen.

"Most people think that we are studying the perfect pop song and will then sell the secret formula to the music industry. But all we are really interested in is to find out how the mind works and earworms are a perfect vehicle for mental mechanisms."

But Tilbrook said the idea of producing pop music to a magic formula was nothing new.

"People have always used those sort of criteria to judge music anyway," he said. "We're talking about people who control playlists and say things like, 'this hasn't got a chorus,' like everything should have a chorus. Well, why must it? Music is there to be explored."