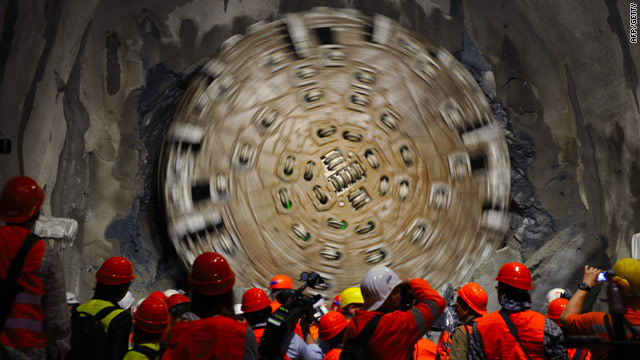 (CNN) -- The longest railway tunnel in the world was completed on Friday in Switzerland when the last two meters of rock were drilled through.

After 14 years of construction the 57 km (34 miles) of the Gotthard Base Tunnel in the Swiss Alps was finally completed when a giant drilling machine nicknamed Sissi cut through the last slice of rock to connect both ends.

After the final breakthrough, 50 miners carrying flags representing the regions of Switzerland involved in the construction walked through the opening, Rahel Probst of AlpTransit Gotthard, told CNN.

"It all went very well, the drilling machine went through the rock and the tunnel was there," said Probst.

Completion of the Gotthard Base Tunnel will cut the travel time between Zurich and Milan in Italy by 60 minutes to two-and-a-half hours and provide an easier and more economic route for heavy freight trains.

Since the first preparations for the tunnel were laid in 1996, over 2,500 workers have taken part in its building according to AlpTransit Gotthard, the company constructing the tunnel. It is due to be operational by the end of 2017.

Freight traffic in the entire Alpine region will grow by as much as 75 percent by 2010, according to a study by the EU Commission.

And according to AlpTransit Gotthard, the flatter route of the rail link "will allow fast, economical freight transportation."

"Only by upgrading its railway infrastructure can Switzerland meet the rising demand for freight transportation and the increasing needs of customers," according to an AlpTransit Gotthard statement.