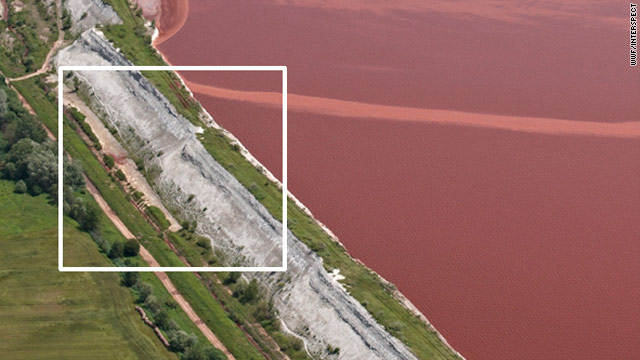 A photo the WWF says was taken of the Hungarian spill site in June, showing "a damaged and clearly leaking sludge pond wall."
STORY HIGHLIGHTS

(CNN) -- Shocking safety lapses exposed by the deadly Hungary toxic sludge spill could be repeated at thousands of industrial sites around the world unless regulations are tightened dramatically, campaigners have warned.

With eight people dead so far and hundreds of villagers evacuated near an aluminium plant at Ajka, 160 kilometers (100 miles) west of Budapest, experts said they believed the spillage of 1,000,000 cubic meters of toxic red sludge from a ruptured dam was a disaster waiting to happen.

The WWF on Monday published a photo taken, the environmental pressure group said, in June and showing one of the pools of sludge -- a by-product of the process to turn bauxite ore into aluminium oxide -- clearly leaking, indicating that the disaster three months later could have been avoided.

Were you affected by the spill? Share your story

The aluminum company, MAL Co., said in a statement Saturday it had performed extensive maintenance work and renovations in the past decade and had followed safety regulations. The company was also now working to construct dams and defense lines in an attempt to minimize damage, it said.

On Monday, investigators arrested the company's chief executive Zoltan Bakonyi on charges of public endangerment and harming the environment.

Greenpeace said it would be some time before the full effects of the disaster were known. "We're very concerned by this. Regionally it's a huge disaster," Bernhard Obermayr, the environmental campaign group's campaigns director for central and eastern Europe, told CNN.

"Villages near the spillage won't recover from this. The sludge is highly toxic, containing arsenic and mercury, both of which can cause cancer and affect the body's nervous system. Those chemicals go into the ground water and will spread throughout the whole Danube region. At least 50 tons of arsenic have entered the eco-system we believe."

Obermayr added that there were thousands more toxic hot spots throughout central and eastern Europe, China, Africa and Latin America. "We've seen what can happen with a big disaster like Hungary, but globally, in emerging economies, disasters are happening all the time that are not reported. There is a constant leakage of dangerous chemicals from mining sites -- not just one big bang like this."

In the European Union, he said, industrial safety standards were high, but Hungary, as an EU accession state, was exempt for another 10 years, and was operating effectively under Soviet-era regulations. "There are lots of indications that this dam was leaking but the management didn't react to the troubles. The pressure on the dams was too high and it was not maintained properly. The owners of the site are asking for EU money, but they are rich enough to afford the cleanup of the site themselves."

An analyst agreed that safety standards at the plant in Hungary appeared to have been very poor. "There seems to have been no sort of risk analysis if the dam broke, as well as fundamental safety flaws there," said aluminium industry consultant David Harris.

"I'm used to working in the aluminium industry in Australia where red mud lakes (where the toxic sludge is stored) are sited hundreds of miles from the nearest populations. Nowhere else have I ever seen a red mud lagoon above a town, like it was in Hungary," Harris said.

"It's always been an irritant to me that Eastern Bloc countries joined the European Union but didn't have to comply with EU regulations. But if Hungary had wanted to join the EU and had to comply with regulations, much of its industry would have had to close down."