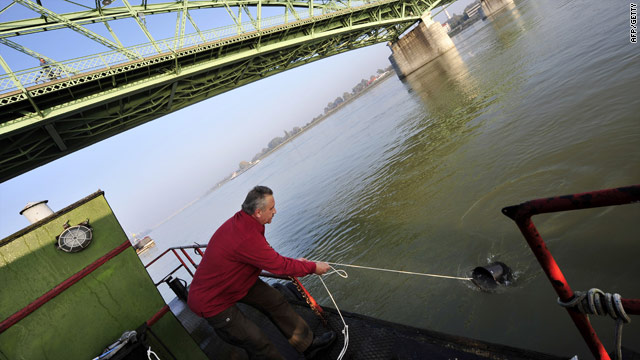 A Hungarian scientist tests samples in the Danube on Friday -- readings indicate the pH level is 8.5, only slightly above normal.
STORY HIGHLIGHTS

(CNN) -- Authorities were evacuating a Hungarian village Saturday after they found new damage in the reservoir that caused a toxic sludge spill this week, an emergency services spokeswoman told CNN.

Hungarian Prime Minister Viktor Orban, who was visiting the stricken area Saturday, said it was "very likely" the reservoir wall will collapse.

If the wall collapses, 500,000 cubic meters of red sludge could spill out -- half of the amount that spilled out Monday, the prime minister said.

All residents of Kolontar village were being evacuated, spokeswoman Gyorgyi Tottos said. Previously, only the residents of a few affected streets had been told to leave, she said.

The sludge inundated Kolontar and two other villages after the aluminum plant reservoir burst, killing seven people and injuring more than 100, officials have said.

Specialists were working Saturday to reinforce the reservoir and take necessary measures to prevent another toxic spill, Tottos said. The reservoir had been repaired after the disaster and the flow from the pool halted.

Water test results released Friday, however, indicated the sludge may not harm the Danube after all. The pH, or acidity, level of the Danube water was 8.5 on Friday -- slightly above normal but not dangerous and able to sustain life, Tottos said.

The 8.5 pH level and fast-moving currents made officials optimistic that a natural disaster can be avoided, she said.

Orban warned of the "toughest possible consequences" for those responsible for the spill and said human error was the cause.