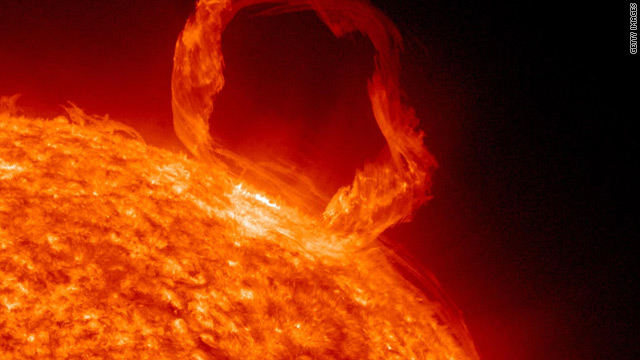 London, England (CNN) -- A new study has shed light on the sun's impact on the Earth's climate, confounding current thinking about solar cycles and how they influence temperatures on Earth.

Previously scientists had thought that radiation reaching the Earth rises and falls in line with the Sun's activity, which during the 11-year solar cycle goes though periods of low and high activity.

But research by Imperial College, London and the University of Colorado in the U.S. examining solar radiation levels from 2004 to 2007 -- a period of declining solar activity -- revealed that levels of visible radiation reaching the Earth actually increased during the period.

Joanna Haigh, leader author of the study published in the journal Nature told CNN: "What the data has shown, rather unexpectedly, is that the decline in ultra-violet radiation is much larger than anticipated. But more surprisingly the visible radiation actually increased as solar activity was declining."

"The decline in ultra-violet radiation is much larger than anticipated. But the visible radiation actually increased as solar activity was declining.
--Joanna Haigh, Imperial College London, UK
RELATED TOPICS

Haigh, a professor of atmospheric physics, says that UV radiation is mostly absorbed in the stratosphere but visible radiation gets through to the earth's surface. The observed increase in VR, despite declining solar activity, may have caused small rises in temperature.

But, as Haigh points out, the research, which covers a short period, comes with some caveats.

"The sun has been behaving very strangely. Its magnetic activity is lower than it has been for several hundred years, perhaps. And so the fact that it's doing strange things in its spectrum is perhaps not that unexpected," she said.

It's also just starting to come out of a very long period (two years) of minimum activity, she says.

As the Sun's activity starts to increase, "it will also be very, very interesting to see if the visible radiation starts to decline," Haigh says.

Haigh is aware that research which contradicts existing ideas about how the Sun's activity affects the Earth's climate is likely to fuel some climate skepticism.

But she says the solar cycles cancel each other out, going up and down over roughly an 11-year period.

"They [the solar cycles] are contributing nothing to long-term global warming," she said, "and it has no bearing on what we understand about greenhouse gases and their influence on climate."

Robert von Fay-Siebenburgen, a solar physicist from the UK's University of Sheffield told CNN: "What has been published is very interesting and a little unexpected, to be honest."

But he says that despite the Sun being our closest star, scientists still know very little about it.

"We have a better understanding of the internal processes -- what is below the surface of the Sun. However, what is above that and how it affects the Earth's climate is very poorly understood," he said.

"But what Professor Haigh has found is very exciting and an important step towards increasing our understanding."

Sir Brian Hoskins, director of the Grantham Institute for Climate Change at Imperial College, London said in a statement: "Studies like this are vital for helping us create a clear picture of how our climate is changing and through this, to work out how we can best protect our planet."