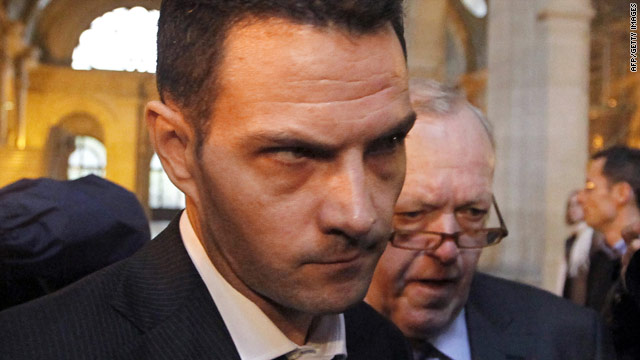 Paris, France (CNN) -- Trader Jerome Kerviel was found guilty of all charges Tuesday for betting 50 billion euros ($61 billion) of a French bank's money without its knowledge.

The judge sentenced Kerviel to a five-year sentence but suspended two years of it, meaning he will serve three years in prison. He was also ordered to pay 4.9 billion euros ($6.75 billion) in damages to the bank.

Kerviel was not immediately jailed and left court after the verdict and sentencing.

Kerviel, a former employee of French bank Societe Generale, went on trial in June on charges of forgery, breach of trust and unauthorized computer use. The banks says the unhedged bets cost it almost $6 billion.

The damages he was ordered to pay was far more than prosecutors had asked. It was thought before the verdict that Kerviel would face a fine of as much as 375,000 euros (about $460,000).

Kerviel's lawyer, Olivier Metzner, called the verdict "unreasonable" and said he planned to appeal. He has 10 days in which to do so.

Kerviel had pleaded guilty to the charge of computer abuse, but Metzner had asked jurors in his closing arguments to acquit his client of the charges of breach of trust and forgery.

Metzner previously told CNN that Kerviel's behavior was strongly influenced by the environment at Societe Generale. "The banks are the ones to blame for the banking system and the systematic economic crisis, not Jerome Kerviel," he said.

Kerviel traded European index futures for the bank. He was the only person ever charged in the case, despite claiming he did everything with the knowledge of his superiors.

"I am convinced the criminal file is full of elements proving that my superiors knew and covered for me. At least I shouldn't be the only one in the dock," he told CNN after the release of his memoirs, "Trapped in a Spiral: Memoirs of a Trader" in which he pleads his innocence.

"During three years, these managers earned colossal amounts of money out of bonuses based on the ever-growing results that I was making for the bank," he said.

Societe Generale, which said it discovered the losses in January 2008, said that at no time were supervisors aware of Kerviel's alleged unlawful activities.