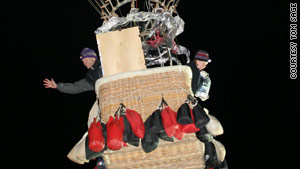 (CNN) -- Authorities in Italy have called off the search for two Americans who went missing during a gas balloon race.

The search ended Monday afternoon and will not resume, said Massimo Maccheroni of the Italian coastal guards. No balloon debris was found during more than four days of searching, he said.

A balloon carrying Richard Abruzzo of New Mexico and Carol Rymer-Davis of Colorado over the Adriatic Sea near Italy made a rapid descent during rough weather, conditions that would make their survival "unlikely," race organizers have said.

"This is very pessimistic information," said a statement from the race organization -- Coupe Aeronautique Gordon Bennett.

Race officials from the competition said they lost contact with the balloon as it was over the sea Wednesday morning.

Officials looked at transponder readings from air traffic control and made calculations from the altitude of the balloon, the time and its location, said flight director Don Cameron. The data showed the balloon had a "moderate descent rate initially which then increased into a high rate of descent, to around 50 miles per hour."

Abruzzo's wife, Nancy, said last week that she was hopeful.

"We've had other challenges before, but we've never lost contact for this long," she said. "But they are smart, strong and capable. And they are survivors."

Maccheroni listed three hypotheses on what happened: Lightning struck the balloon and it exploded; the balloon suffered a failure and went down quickly into the ocean; or the balloon dropped slowly, making survivability more likely.

The balloon was equipped with a satellite phone, VHF radios, a radar transponder and two mobile phones, but efforts to contact Abruzzo and Rymer-Davis were unsuccessful.