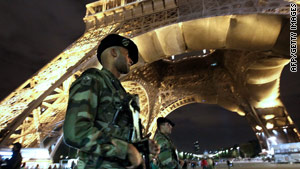 Didier Allard of the Palais de Justice appeals court identified the man as Riahd Hennouni, and said an anti-terror judge in Paris had requested his arrest.

Paris has not yet heard back from Rome about its extradition request, Allard said.

The request comes a day after Italian police told CNN they detained a French citizen of Algerian origin suspected of being a member of al Qaeda.

He was arrested "about a month ago," but there was no announcement at the time, Lepore said, adding: "We don't report every arrest that we make."

News of the arrest coincides with heightened security concerns across Europe after news emerged last week that Western intelligence officials were looking at information about a possible "Mumbai-style" attack in cities across the continent.

However, a source familiar with the arrest of the Algerian said the man was not connected to last week's news, and that police in Naples have been investigating him for some time.

CNN's Winnie Andrews in Paris and Hada Messia in Rome, Italy, contributed to this report.