Rescuers use robot in search for missing balloonists 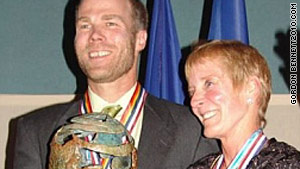 Rome, Italy (CNN) -- The search for two Americans who went missing during an international gas-balloon race continued Saturday as an underwater robot joined in the pursuit.

Race organizers said Friday a balloon carrying Richard Abruzzo of New Mexico and Dr. Carol Rymer-Davis of Colorado over the Adriatic Sea near Italy made a rapid descent during rough weather, conditions which would make their survival "unlikely."

Race officials from the competition said they lost contact with the balloon as it was over the sea shortly after 8 a.m. local time (2 a.m. ET) Wednesday.

We've had other challenges before, but we've never lost contact for this long.
--Nancy Abruzzo
RELATED TOPICS

On Friday, Italian authorities took photos of debris found in the sea and forwarded them.

"We've had other challenges before, but we've never lost contact for this long," she said. "But they are smart strong and capable. And they are survivors."

Maccheroni listed three hypotheses on what happened: Lightning struck the balloon and it exploded; the balloon suffered a failure and went down quickly into the ocean; or the balloon dropped slowly, making survivability more likely.

The 20-balloon race began last weekend near Bristol, England, with pilots vying to fly the farthest from the start point. The balloons flew over the English Channel and continued south across France, with most of the balloons eventually landing in France or northern Spain.

Rymer-Davis is a radiologist in Denver, Colorado, according to CNN affiliate KUSA. She and Abruzzo won the 2004 Gordon Bennett race, which took off that year from France.