12 dead in bus crash in Germany 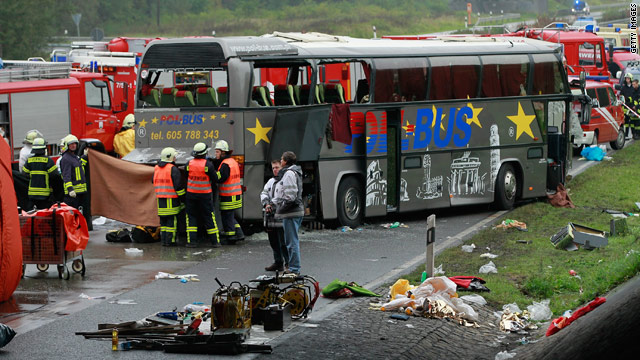 The collision occurred on the A10 in Brandenburg when the bus tried to avoid a vehicle coming onto the motorway, police spokesman Jens Quitske said. The bus lost control and collided with the column of a bridge.

Among those severely injured was the driver of the other vehicle. In addition, 20 more suffered minor injuries.

The bus was a Polish holiday bus making its way from Spain back to Poland, Quitske said. He could not confirm whether all those on board were Polish, but said all the fatalities were adults.

"I was shocked to hear of the tragic bus accident near Berlin in which so many Polish nationals lost their lives," German Foreign Minister Guido Westerwelle said. "This accident doesn't just concern our Polish friends, it also affects us. Our deepest sympathies and condolences go out to the family and friends of those who died."

German emergency services were doing everything in their power to save the lives of the injured, he said.