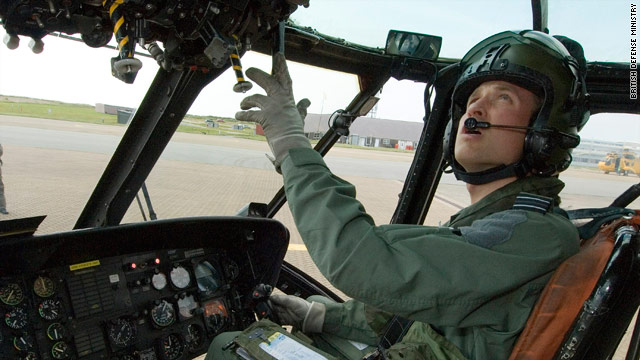 Prince William sits in a helicopter cockpit in an image released by the British Ministry of Defense.
STORY HIGHLIGHTS
RELATED TOPICS

London, England (CNN) -- Britain's Prince William, the second in line to the throne, became a fully qualified search and rescue pilot after graduating from his training course Friday.

William, 28, will now join a squadron at RAF Valley, the Royal Air Force station on the island of Anglesey in Wales, according to Clarence House, the prince's official residence.

Known as Flight Lieutenant Wales within the Air Force, William will be a co-pilot of a Sea King helicopter, working as part of a four-person crew.

The prince said he was "delighted" to have completed the training course, which involved 70 hours of live flying plus 50 hours of simulator training, Clarence House said.

"I absolutely love flying, so it will be an honor to serve operationally with the Search and Rescue Force, helping to provide such a vital emergency service," William said in a statement.

Search and Rescue crews assist both military personnel and civilians in the United Kingdom, rescuing people from water, mountains, flooded regions or other areas on land.

William's posting at RAF Valley was partly his choice. Everyone on the training course was able to state two preferences for where they would be based, and William, who had served at RAF Valley before, chose that station as well as one in Scotland.