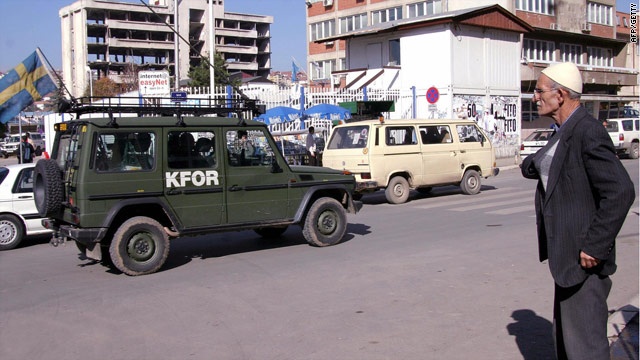 A jeep patrols Pristina, the capital of Kosovo, as part of a NATO-led force. Talks between Kosovo and Serbia now look likely.
STORY HIGHLIGHTS
RELATED TOPICS

London, England (CNN) -- The U.N. General Assembly has adopted a landmark resolution calling for talks between Serbia and Kosovo, which declared its independence in February 2008.

Serbia has refused to recognize Kosovo's independence but the resolution on Thursday could open the way for the first direct talks between Belgrade and Pristina since the split.

Serbia had planned a resolution questioning Kosovo's independence, but softened it under pressure from the European Union to draft a compromise text, according to Agence-France Presse.

The EU agreed in turn to foster "dialogue between the parties" to bolster security in the Balkans and help Serbia and Kosovo in their efforts to join the EU.

"Dialogue in itself would be a factor for peace, security and stability in the region," said the resolution, which was passed without a formal vote.

Serbia's Foreign Minister Vuk Jeremic said that he hoped the resolution "would help create an atmosphere conducive to the creation of a comprehensive compact of peace between Serbs and Albanians achieved through good faith dialogue."

However, he reiterated that "Serbia does not and shall not recognize the unilateral declaration of independence of Kosovo."

The start of the debate was held up for two-and-half hours when Jeremic saw Kosovo president Fatmir Sejdiu and its prime minister and foreign minister in the assembly hall.

Jeremic said they were not from a sovereign state and should not be present. After protracted talks, the assembly president Ali Abdussalam Treki, of Libya, told him that the Kosovo leaders were guests of Britain, France, Germany, Italy and the U.S.

In a statement issued prior to Thursday's vote, EU High Commissioner Catherine Ashton welcomed the resolution.

"We have been working together with Serbia and this result today is a reflection of our common commitment to Serbia's European perspective," Ashton said. "The important thing will be that the dialogue between Belgrade and Pristina can start."

Kosovo -- population 2 million, including an estimated 120,000 ethnic Serbs -- declared its independence from Serbia in February 2008 after being under U.N. administration since the 1998-99 war by Serbian forces against ethnic Albanian separatists.

In July this year the International Court of Justice ruled that Kosovo's declaration "did not violate general international law."

Kosovo is recognized by 70 countries including the U.S. and 22 of the 27 EU members. Serbia is backed by Russia in rejecting independence. Russia, a traditional Serb ally, also opposed NATO intervention in Kosovo in 1999.