Arrests made at Blair booksigning in Dublin 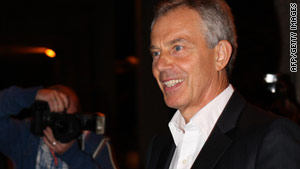 Tony Blair's book, "A Journey," describes his time in office, including his decision to go to war in Iraq.
STORY HIGHLIGHTS
RELATED TOPICS

Dublin, Ireland (CNN) -- Police made a "small number" of arrests in Dublin where former British Prime Minister Tony Blair was due to sign copies of his autobiography Saturday, a spokesman for Ireland's national police service said.

Despite reports that shoes and eggs were thrown at Blair, police could not confirm whether anything was thrown at him, and video from inside the store showed him unscathed, without any stains on his jacket.

A crowd of people, some of them anti-war protesters, gathered outside the shop to protest Blair's role in the wars in Iraq and Afghanistan.

A line of police wearing fluorescent yellow jackets kept them back from the street in front of the Eason bookshop in central Dublin.

Dozens of police were on duty in the street outside the bookshop since early Saturday and sections of the main thoroughfare were cordoned off to traffic.

Blair's book, "A Journey," describes his time in office, including his decision to go to war in Iraq. All proceeds from the book are going to the Royal British Legion, Blair has said.